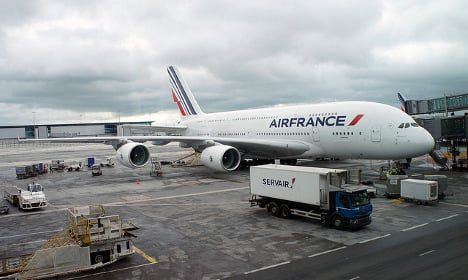 An Air France plane at Charles de Gaulle. Photo: mariordo59/Flickr
Air France announced that it would cancel 25 percent of its medium-haul flights to and from Paris-CDG on Saturday, with 25 percent of pilots taking part in the strike.
The airline will cancel a further 10 percent of its long-haul flights and 10 percent of its domestic flights for the day.
The strike is scheduled to run for four days, although how passengers will be affected beyond Saturday remains unknown as yet.
The strike is motivated by pay and the pilots' battle to “defend their jobs” as competition increases from other Air France's budget subsidiaries like Hop! and Transavia.
Pilots are also worried that Air France is losing out to its partner KLM each year when it comes to long haul services. They want this balance put right.
Air France itself said that it did not support the strike.
“Air France regrets this situation and is making every effort to minimize the inconvenience this strike action may cause to its customers,” the airline said in a statement.
The cancellations on Saturday – and any that might crop up in the coming days – could cause travel chaos at the start of the Euro 2016 football tournament in France.

The four-day strike, organised by the two largest unions SNPL and SPAF, has been described by one French newspaper as “the most absurd of the year”.

Passengers flying with Air France’s partner companies or subsidiaries like KLM, Delta, Transavia and Hop! will not be affected by the walk out.

In a statement to The Local on Friday morning an Air France spokesperson said all details will be published the day before the action.

“Customers whose flight is cancelled will be informed by Air France's commercial teams who will be doing all they can to inform and assist them.

“Commercial measures, available on the airfrance.com website, have already been implemented to allow passengers to modify their trip at no extra charge.”

Sympathy among the French public for the ongoing strikes is decreasing by the day, but the public are rarely supportive of Air France pilots, which the Nouvel Observateur magazine described as some of the “best qualified and best paid workers in France”.

The last Air pilots’ strike in the summer of 2014 cost the company up to €500 million and bosses fear the latest industrial action will be another financial hammer blow for the company.

“Air France considers that a four-day pilot strike, at a time when the company is posting positive results after eight years of losses, will jeopardize this positive momentum and seriously risk compromising the efforts made by all the Company's staff,” said an Air France spokesperson in a statement.

“Air France's situation remains fragile, and the commitment of all the different staff categories to ensure the Company's growth and provide a caring image to its customers is a necessity.”