A Porsche was swallowed up by the tide in Arcachon on the western coast of France on Wednesday.

The Porsche S4 Panarema, which costs €120,000 to buy new, had been legally parked on an access ramp to the sea before it was swept in by the waves, reported the Sud-Ouest newspaper.

See a video below.

The scene, which was captured on camera by photographer David Ollero, has since caused quite the buzz on French social media.

A local boating union tweeted (below) “We're right here if you wanted to take a boat tour”.

It also made headlines in Switzerland, which is where the car was registered.

The car was towed from the water before it got swept too far, and was taken to a nearby garage, where the owner learned that it wouldn't be possible to drive it home due to the water damage. 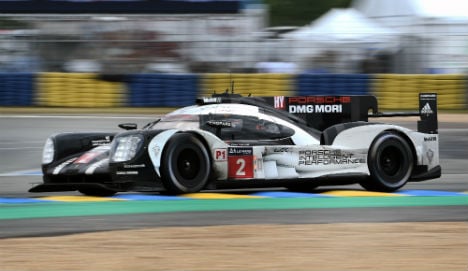 Switzerland's Neel Jani drives his Porsche 919 Hybrid N°2 during the 84th Le Mans 24-hours endurance race. Photo: Jean-Sebastien Evrard/AFP
Neel Jani took the Porsche 919 Hybrid over the line, to elation and tears of joy in their garage, after Kazuki Nakajima's Toyota TS050 stuttered to a halt when looking nailed-on to win the endurance race for the Japanese team for the first time in three decades of trying.
Jani, Romain Dumas and Marc Lieb, drivers of the Porsche number two car, celebrated wildly in front of 263,500 fans in the 84th edition of the gruelling showpiece, which began on Saturday under driving rain and behind a safety car.
In contrast, Toyota saw their Le Mans jinx strike at the worst possible time.
The Toyota garage looked on aghast as Nakajima's car suddenly began slowing with only five minutes of the 24 hours to go.
He had been as much as 90 seconds ahead at one point, but suddenly it all went wrong and he began to lose power, allowing Jani to close fast.
Nakajima came to an agonising stop on the straight as Jani sped past to victory.
Toyota's number six car with Stephane Sarrazin at the wheel crossed the line in second with an Audi third.
SHOW COMMENTS
Url copied to clipboard!