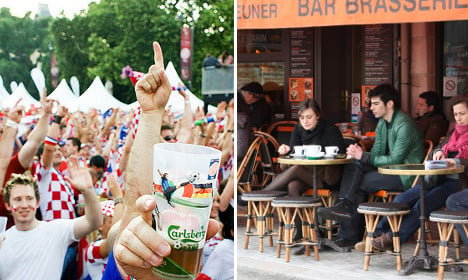 If you're planning on popping over to France to watch some football between June 10th and July 10th, you might be worried about train strikes (which might actually be called off soon), extravagant hotel room prices, or the US warning its citizens about terror attacks… but there’s really not much you can do about any of those things.

So instead, how about focusing on what you can control: yourself.

Here's The Local's guide for how not to behave like an all singing, all drinking football fan (apologies for the stereotype) and how to pass yourself off as a respectable, refined French person. We understand you'll immediately look to start chanting football songs as soon as you get off the boat, plane or train in France, but there are more appropriate ways to act once you are here.

Save your vocal chords for the stadium and why not debate controversial subjects such as politics or philosophy or even better the merits of the controversial French labour French reforms. You can swat up here.

Don't fight, but argue loudly and wave your hands

Football fans have a reputation for having a tendency to get involved in a bit of fisticuffs when things get overheated.

But in France there's no need to. Feel free to get as worked up as possible without throwing punches, glasses or chairs because that's what the French do.

They can have a stand-up argument for days without ever coming close to exchanging blows, apart from the odd stray Gallic gesticulation that might brush your face accidentally. So if you get involved in an exchange with some other group of fans about who's the hardest, just discuss it.

We know it's tough where you come from to order a half pint. You'll get accused of being an unmanly “pansy” and be ostracized. But in France it's OK.

You can still be man and hold a halve pint, or a demi as it's called here. And importantly, a demi won't get warm before you can finish it.

Granted if the queues for the bar are long, get six.

Ditch your football scarf for a foulard

Ditch your football scarves and emulate the chic French by tossing on an elegant foulard. Wrap it around your neck several times rather than holding it above your head, arms aloft. Best worn with a brooding expression and artfully disheveled hair.

At least try and say 'Bonjour'

The most important word in French is non other than Bonjour. Your hosts will love you if you make the slightest effort and that means just saying bonjour to everyone you meet, from police officers, security guards, ticket collectors at stadiums to bar staff, people in the lift at your hotel. Just keep saying it.

You can never overdo it. Here are some other handy tips on successfully conversing with the French.

Don't say “f**k”, say putain
We understand that watching football can be tense and frustrating and you often can't resist the impulse to swear. “F**k off, f**king penalty! F**k you Ronaldo, etc etc.
But at least make an effort when you're in France, which means dropping f**k and saying putain instead.

The word “putain” is an all-encompassing swear word that you shouldn't say in front of your grandma, but which you can say everywhere else.
Here is a handy guide for how to pronounce it and when to use it.

(Okay, maybe not that long…)

Many men of the football supporting type, especially from Britain, tend to have shaved heads. But look, you're in France now, and Frenchmen don't do shaven heads. So it's time to grow it out and go for the voluminous, dishevelled hair style.

If a bar has no seats left, don’t stand up

Unlike in England or the US, typically the French prefer sitting down and relaxing when out at the bar rather than this vertical drinking nonsense. Getting jostled around and having beer spilled on their shoes is not really what the French look for on a night out.

So if there are no empty seats, move on to the next bar until you can pull up a chaise and enjoy a leisurely drink. Among the French, the English have a reputation for going a little overboard when it comes to drinking, so be mindful of your alcohol consumption if you want to avoid exasperated eye-rolls from the locals.

The French generally try to avoid scenes like the one below, taken in Manchester, England on New Year's Eve last year. Although many of the French probably wouldn't quite see it this way, it’s been described as “a beautiful painting”.

You might think nothing of buying a round of pints for all your mates and then expecting someone else to get the next one, but in France it’s usually not done like that. Instead, at the end of the night you go up and split the bill between the 27 of you.

And keep it down will you

Talking too loudly is a common complaint the French (or at least the Parisians) have about tourists. The French are quite discreet and reserved in general, so basically take whatever you think is a normal speaking volume and halve it.

The whole French café system, where people are seated inches from each other on tiny tables and chairs, only functions if everyone keeps their voices down.

Eating is not cheating in France

In France when it comes to drinking “eating is certainly not cheating” and won't lead to scowls of disgust as often does in the UK.. So don't spend night after night drinking followed by a late night kebab. The French do the food thing quite well so make the most of it. All host cities will be jammed with restaurants.

Settle for a coffee and a tartine, or perhaps a croissant or a pain au chocolat  But for the love of Dieu, don’t slice your croissant in half and smother it in butter and jam.

No need to spend the month in a Irish/British pub Look the host cities have a lot of pubs, good ones as well. We know many fans like to feel at home when abroad but really, you can try and branch out a bit and try a few places frequented by the locals.

Just ask them where they are going and follow along. Remember to say bonjour.