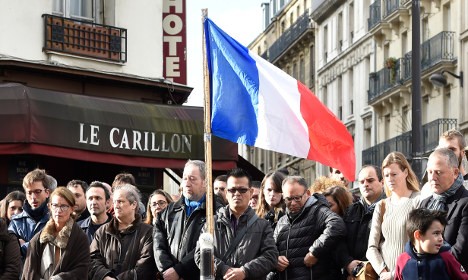 A 25-year-old French woman is set to be sentenced after she pretended to be a victim of the November attacks in Paris in a bid to claim €20,000 compensation.

The woman, from Yvelines in the Île de France region, will be sentenced before the Criminal Court of Versailles on Monday after pleading guilty to fraud and attempted fraud.

The day after the attacks, the woman came forward to investigators claiming that she had been seriously injured by a suicide bomb at the Carillon bar.

She said that her arms were burned and that she had suffered a miscarriage in the attacks, reported Le Parisien newspaper.

Investigators had their suspicions aroused immediately, no doubt, by the fact that there was no bombing at the Carillon bar, where terrorists used machine guns to attack patrons.

The woman was insistent to know when exactly she would receive the €20,000 compensation as a victim, which further puzzled investigators.

A source close to the investigation said this was “very unusual” behaviour for a victim, adding that most were in total shock.

Investigators became all the more dubious when they found the same pictures of burned arms on the internet that the woman had submitted as her own.

Also, the doctor who had apparently signed her medical certificate wasn't even registered as working in a Paris hospital on the night of the attacks.

Finally, the woman was confirmed to be pregnant at the time of the investigation, suggesting she hadn't lost a baby at all.

The woman was remanded in custody in January. She faces a fine of up to €375,000 and up to five years in prison.