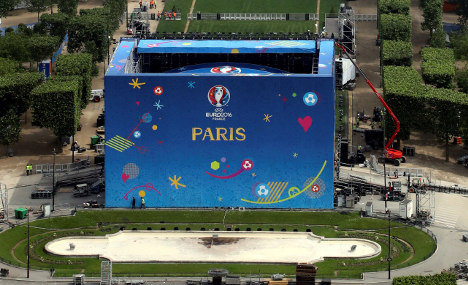 With Euro 2016 starting in Paris this Friday, security and the terrorism threat is the subject on everyone's minds.

France has already said that it will deploy more than 90,000 police and security guards for the football tournament, vowing to do “everything possible to avoid a terrorist attack” during the event.

Euro 2016 organisers, security chiefs, the French government, as well as the British and Americans are clearly worried about the prospect of terrorists targeting the tournament.

Given the repeated warnings issued about the threats at stadiums, fan zones and even the Metro and train stations in France, foreign visitors would be forgiven for thinking that there's no point even coming to France.

But what about the locals in France and especially Parisians, who experienced two devastating jihadist attacks in their city last year?

Given what they have been through Parisians have certainly earned their right to talk up on the issue.

At the mini fan park at the Hotel de Ville in the centre of Paris, the overall mood was one of cautious courage rather than fear.

There was a defiance to continue on as normal, along with a consensus that, despite the fears, life must go on on for both Parisians and those visiting France.

“I'm not worried about terrorism during the Euros at all,” a man named Dominic, 45, told The Local. “I am a true Parisian. I will never change the way I live no matter what.

“I was in Paris during the attacks in November and at Charlie Hebdo. I will continue to take the Metro and the bus despite people's fears during the tournament. The day I change the way I live I will no longer be a Parisian.” Roxanne, an office worker based near the Hotel de Ville, echoed those sentiments.

“If it happens, it happens. Life goes on. I certainly will not be changing my day-to-day routine. We have no way of predicting when and where an attack could happen. All Parisians and tourists can do is to make the most of their lives.”

A young mother who declined to give her name said: “I'm not scared. You just can't live like that. I have a small child and we will still be taking the Metro and coming into the centre of the city during the Euros.”

Rather than play down fears and try to reassure those visiting France for the tournament, the French government has repeatedly talked of the real risk of an attack.

And authorities have almost gone out of their way to demonstrate how devastating an attack could be. The dozens of simulated terror attacks carried out in recent weeks, including mock chemical attacks, have produced images that alone would probably put people off going anywhere near a stadium.

The government argues that no stone can be left unturned. Some Parisians have claimed this climate of fear, which the media have only intensified plays into the hands of terrorists by building up a fear of all Muslims, which only creates more division.

One British newspaper described France as a “war zone” this week, which it clearly isn't, even if you do see soldiers patrolling the streets. A Parisian woman named Monique said: “The news about the man arrested in Ukraine was important because it reminds everyone that terrorism and extremism is not exclusive to one religion or people. There are a lot of mad people about.”

Despite the vow to not give in, some Parisians were still intent on going about their daily lives with a clear air of caution.

Nicole, 95, who is a third generation Parisian, said: “I have lived through wars and even I believe we must be attentive and vigilant.”

“Paris is not an easy place to live at the moment, what with the strikes, floods and fear of terror attacks, but we must live nonetheless.”

However not all those The Local spoke to shrugged off the terror fears. A few were keener to adapt to the potential risks the tournament brings with it.

Vencke, a Norwegian woman who works in a hotel in the capital and has lived in Paris for 20 years, told the Local: “I'm very worried about a terrorist attack over the next month. I have a young son and we'll try and use the bus more than the Metro.

“Since the attacks in November day to day life has continued as normal, but big events like this are scary.

“What you can not forget is that people are scared for a reason – and rightly so.” (The Paris fan zone near the Eiffel Tower, were tens of thousands of fans are expected to congregate. Photo: AFP)

Frederique, a hairdresser who lives just outside of Paris said: “Of course I'm worried about a terrorist attack. I think it's very likely. I have to come work here so I cannot change my day-to-day routine much during the Euros to decrease the risk. When I am not working, though, I will stay at home out of the way.”

Would Parisians encourage foreign visitors to come to the city right now?

Most were adamant there was only way to win against terror.

Paula, a Spanish mother-of-one who moved to Paris five years ago, said: “My advice to people is come, Paris is wonderful. And don't be scared. Being scared does not change anything.”

Louis, a 26-year-old, who only recently moved back to Paris from Vietnam, said “Come to the Euros and go to a match! That's how we beat terrorism.”

Euro 2016 presents a real chance for visitors to express their solidarity and fraternity with France and Paris, if they can put aside their understandable fears.

In a message to fans deputy mayor of Paris, Jean-François Martins, told The Local: “Look at what has happened here since November. We have had the COP 21 conference, Fashion Week, the Paris Marathon, all of which were held without incident.

“Look at how Parisians have got back to normal life after what they witnessed in November. They are back in the cafes and on the terraces. They have got their confidence back and that's what we want to share with those who come.”