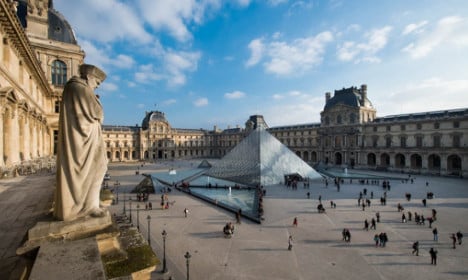 Photo: Musee Louvre/Twitter
After remaining closed for five days, the Louvre museum and the Musee D'Orsay have reopened their doors to the public.
The Louvre – the world's most visited museum – reopened at 9am on Wednesday, with officials saying that there had been no damages from the floods.
There were serious damages, however, to ticket sales. It's estimated that the museum lost out on around €1.5 million in unsold tickets, with 120,000 people missing their chance to find the Mona Lisa.

The Department of Islamic Art remains closed for the moment until it is restored to normal, the museum's official site said.
Workers at the Louvre had closed to remove works stored underground to be stored on higher floors during the floods.
The Musee d'Orsay, which holds the world's greatest collection of Impressionist masterpieces, reopened at 9.30am on Wednesday. It's understood that it suffered no damage either.  However there will be no late opening on Thursday evening.

Both museums were shut down as a precaution as the waters of the River Seine approached a peak of what eventually was 6.10 metres above normal levels. Luckily, both institutions had organised drills this year to deal with floods.

Below are some pictures from a worker at the Louvre showing the shifting of art as flood waters increased.

The torrential rains in France have since moved to the north east, with large swathes of the country put on alert on Wednesday as the deadly storms continued.