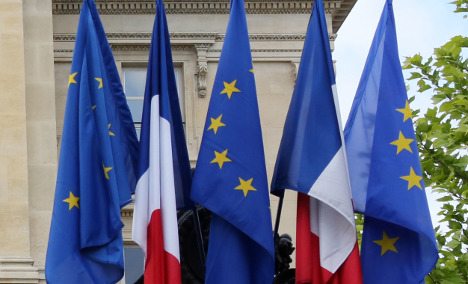 Confirmation, if any were needed, that French attitudes towards the EU were steadily hardening came in the form of a new survey this week.

The respected American think-tank Pew Research Centre published its latest study on the attitudes of Europeans towards the European Union.

And those of the French stood out – even more than the British.

Only Greece, a country whose people felt humiliated by the EU during the debt crisis, has a more euro-sceptical public than the French, with 71 percent having an unfavourable view.

'The Germans have a gun to our heads'

The growing frustration of the French towards the EU should come as no surprise. Back in 2013 the same study by Pew Research Centre revealed that 58 percent of French people held an unfavourable opinion of the EU.

Although between 2013 and 2016, Pew studies revealed the French had warmed again to the EU, but this year's dramatic increase in the percentage of those with unfavourable views,  showed it was only a temporary change of heart.

Back in 2013 the study said: “No European country is becoming more dispirited and disillusioned faster than France. In just the past year, the public mood has soured dramatically across the board.”

The French have their own reasons for turning against the EU, which differ to those of the British which center mainly on immigration issues and a loss of sovereignty to Brussels.

In France there is increasing anger that the country is effectively being forced to follow the German economic model.

There is widespread acknowledgement that President François Hollande’s unpopular labour reforms are being pushed through to satisfy Brussels as much as French business leaders. As were his other pro-business reforms.

Austerity measures, effectively imposed on France from the European Commission and in particular Berlin, have not been easy to swallow.

“Reforms we should have brought in ourselves a long time ago are now being imposed from abroad, with a gun held to our head and in the humiliating shadow of a German spiked helmet,” wrote columnist Eric Verhaeghe.

Ulrike Guerot Founder and Director of the European Democracy Lab told The Local previously that France is still mired in a period of “sulking” with Paris miffed that Berlin has “all the benefits of being in the EU, like cheap labour”.

READ ALSO: 'UK show us the way' – The French dreaming of Brexit There is also the fact that France has struggled to adapt to a changing world compared to other countries.

Globalization has been hard to digest, with many French, particular those of the older generation who remember the country as an economic, linguistic and cultural powerhouse, struggling to accept being a back seat driver in the EU.

It's no surprise therefore that the Pew study revealed that the over 50s in France had the least favourable opinions of all EU countries – just 31 percent – apart from Greece. In contrast 56 percent of young French people had a favourable view of the EU.

The Pew Research centre study also revealed some other reasons for the French growing disheartened with Brussels.

Some 66 percent disapprove of the the EU’s handling of the economy (compared to 55 percent of Brits) and 70 percent (the same figure as for the British) were critical of its handling of the refugee crisis.

The distinct cooling of the rapport between the French and the EU is reflected in the growing support for anti-EU political parties like the National Front.

So could the French soon bring about their own Frexit referendum?

It’s unlikely given that the two mainstream parties are pro-EU, but there’s no doubt that if Britain left the EU, France’s eurosceptics would push hard for their chance to leave.

“It’s now or never,” Eurosceptic French MP and 2017 presidential candidate Nicolas Dupont-Aignan told The Local this week. “The British have an historic chance to escape from prison and when you see a prison door open up, you have to get out.

For him there’s no doubt a Brexit would pave the way for an eventual “Frexit” because he believes the EU would fall apart without one of its most powerful members.

“Britain was the first democracy in the EU and they are always giving us lessons, so it’s no surprise they go first,” Dupont Aignan said.

“And when the French get the same vote one day, there’s no doubt they will vote to leave the EU,” he added.