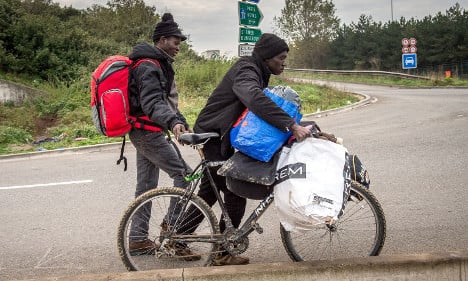 Photo: AFP
Pascal Brice, the head of the French Office for the Protection of Refugees (OFPRA), said France had counted 33,000 asylum requests between January and May, compared to 28,000 for the same period in 2015.
He described it as a “controlled increase” after a 2015 which saw a 23.6 percent jump in requests due to a burst of asylum requests at the end of the year as Europe's migration crisis hit peak levels.
France received 80,075 asylum requests in 2015 — mostly from Sudanese and Syrian nationals. It is far from the one million arrivals in Germany which has borne the brunt of the crisis.
“There is no asylum crisis in France,” said Brice.
Many refugees are reticent to come to France, with its notoriously complicated administrative process and lack of beds for asylum-seekers which leaves many on the street.
Paris has promised to take another 30,000 refugees as part of a European Union deal to share the burden among member states, and has scrambled to create new welcome centres and ease the administrative process.
Interior Minister Bernard Cazeneuve said France would accept 400 refugees per month who are currently in Greece to reach its goal.
In Paris alone, police have undertaken 23 evacuations of makeshift camps around the city and moved people into more permanent reception centres.
Paris Mayor Anne Hidalgo said last week she wanted to create a refugee camp in Paris to provide proper accommodation for asylum seekers.