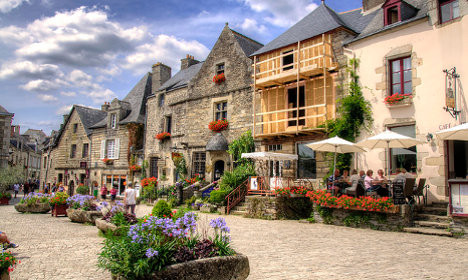 Photo: Tony Shertila/Flickr
The village of Rochefort-en-Terre in Morbihan, Brittany has been named the best village in the whole of France according to “Village prefere des Francais” on TV Channel France 2.
The Breton village triumphed in the hotly contested competition of 13 villages across the country, only marginally beating second place Montreuil-sur-mer in the northern Pas-de-Calais département.
Third place was awarded to the southwestern village of Rocamadour in the Dordogne Valley.
This marks the second consecutive year that a village in Brittany has secured the top spot, after Ploumanac’h’s victory in 2015.
Around 175,000 people participated in the voting online. Photo: Cesar Vielba/Flickr
Presenter Stéphane Bern, who acknowledged the substantial economic benefit of the title for victorious villages, announced the results live in the village on Tuesday night.
He said that the four previous winners have all seen their visitor numbers increase by 40 percent after taking the crown.
Rochefort-en-Terre and its 700 residents already welcome more than 500,000 visitors each year.
“It won't be same around here from now on,” Mayor Jean-François Humeau told the Ouest-France newspaper.
“In 2017, we will host nearly 1.2 million people and after that it will decrease by between 30 and 50 percent. But there will still be 900,000 visitors. All the same, that is still huge.” The Notre-Dame-de-la-Tronchaye. Photo: Frederic Role/Flickr
The village, situated on a rocky ridge high above the River Arz in the Morbihan département in the Brittany region, has previously been voted “one of France’s most beautiful villages” according to the website Brittany Tourism.
The geranium-clad village boasts a 13th castle and half-timbered 16th century buildings, as well as symmetrical stone built renaissance structures.
Described as a “little town of character” by Brittany Tourism, it seems that the village’s narrow streets and wealth of ateliers and workshops enchanted the viewers of France 2. Photo: GoogleMaps
Presenter Stephane Bern was won over by the warm welcome in Rochefort-en-Terre and the village's “charming people”, reported Ouest France.
“It feels good here, it feels good being in Brittany. I must admit that I had a few preferences among all these French villages, and Rochefort-en-Terre was one of them,” the host said.
Every year since 2012, France 2 has run the competition in order to showcase the best villages of France.
And in case you need any more reason to visit, here are some more pics from Rochefort-en-Terre.