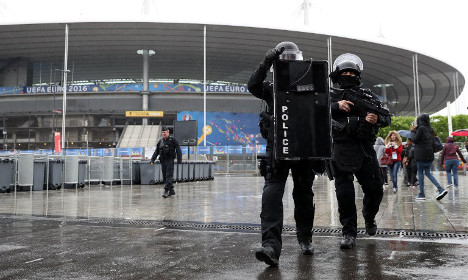 Despite putting unprecedented security measures in place for Euro 2016, France remains deeply concerned over the jihadists' ability to strike a soft target.

Millions of foreign visitors and the world's press are set to descend on the country for a month of sporting action from Friday — creating endless nightmares for its overstretched security services.

While the recent floods, strikes and violent protests plus the usual threat of hooligans all complicate the issues facing French security forces, the most worrying threat to the tournament comes undoubtedly from terrorists.

On Tuesday Britain became the latest country to warn its citizens of the high terror threat during the tournament, saying “stadiums, fan zones, bars and transport hubs” could be targets for terrorists.

“From the point of view of preparation, we have done as much as possible. Everyone has been mobilised: police, paramilitaries, many soldiers,” a senior counter-terrorism official told AFP, on condition of anonymity.

But, he said, “to be totally honest, I'm worried.”

'If there are deaths the teams will go home'

The big question is what would happen if an attack took place – and the counter-terror official is under no doubt that the tournament would have to be called off.

“If there are any deaths, it's simple — three-quarters of foreign teams will leave France,” said the official.

“And if Daesh (an Arabic acronym for Isis) claims an attack and promises more, everyone will leave. In any case, how could we continue to have a football party while we're burying victims?”

Despite the clear terror threat to Euro 2016 and the two deadly attacks in Paris last year that left 130 dead, the French government has vowed it would not give in to fear and resisted calls for it to hand the tournament over to another host country.

It's likely they would be equally resistant to any pressure to cancel the tournament if there was an attack.

French terror expert François-Bernard Huyghe said it would all depend on the seriousness of any attack.

“We have never had a situation like this before. Everyone is conscious about the threat. But if the French government starts cancelling one event, then it could up calling off everything – the Tour de France, the Cannes Film Festival,” said Huyghe. 'We have reestablished borders but we shouldn't dream'

If there was an attack in or around a stadium where jihadists had managed to get through security systems in place then confidence in French authorities to keep fans safe would quickly drain away.

An attack in a bar however, far from a fan zone or a stadium, which would be impossible to protect, may not bring about the end of the tournament that Isis would so clearly desire for their own prestige.

President Francois Hollande acknowledged the threat on Sunday, though he tried to put a brave face on it.

“This threat will last for a long time, unfortunately, so we must do everything to ensure that the Euro 2016 is a success,” he told France Inter radio.

Hollande's government introduced a state of emergency in the wake of last year's jihadist attacks in Paris, allowing police to raid homes and place people under house arrest with minimal oversight.

But the challenge of monitoring those who have returned from Syria and Iraq, or who have snuck into Europe using false passports or with the influx of refugees, has overwhelmed the continent's security services.

Tensions were raised further on Monday, when Ukraine's security services said they had arrested a suspected far-right extremist Frenchman with an arsenal of weapons and explosives who was allegedly planning “15 terrorist strikes” before and during the tournament.

Then on Tuesday came a deadly bombing in Istanbul.

As well as Britain, the US State Department has also laid out its own concerns in black and white.

“Euro Cup stadiums, fan zones, and unaffiliated entertainment venues broadcasting the tournaments in France and across Europe represent potential targets for terrorists,” it said in a statement.

France has mobilised a huge security detail of 90,000 police and security guards to protect the 10 venues hosting matches around the country.

Some of the 10,000 soldiers deployed around France since last year's deadly jihadist attacks in Paris will also be used to secure the matches.

While fan zones and stadiums will be under heavy guard and surveillance, a bigger risk may exist in adjoining areas.

The attacks on November 13th in Paris that killed 130 people demonstrated that hitting random “soft targets” such as bars and restaurants was just as effective in generating fear.

“Our objective is for the Euro to be a big festive gathering, but we owe the French the truth. One hundred percent precaution does not mean a zero percent risk,” Interior Minister Bernard Cazeneuve said recently.