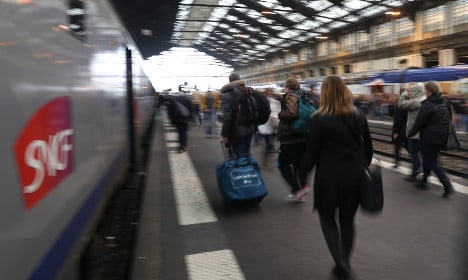 Photo: AFP
The last thing you want to see before your weekend away is an email saying your train has been cancelled.
Not delayed. Not changed. But cancelled.
This is exactly what happened to my train on Friday night to Brittany, where I was planning to spend the weekend away.
And, very importantly for non-French speakers – the email said in French that it had been “cancelled” but in the accompanying English translation only said “there could be a disruption”. Beware.

The train was among the roughly 50 percent of trains that have been cancelled in the past week due to ongoing strikes by SNCF workers who are unhappy with their working conditions, and who are protesting against deeply unpopular labour laws.
After seven days of protests from the members of the CGT-Cheminots and SUD-Rail unions, the SNCF on Tuesday handed the unions a new agreement that would end the strikes if signed, with just three days before the Euro 2016 tournament begins.
But for those of us affected by train cancellations – there are options for travel.
While the emails from SNCF don't mention anything about how to get around the inconveniences, the customer service team (who apparently weren't on strike) told me I could take any train out of Paris in the same direction on my old ticket, but that I would simply have to find space in the aisles, corridors, or in the bar.
So I did, after chaotic racing along the platforms with other displaced passengers. We then jostled for four hours in the bar of the train that (eventually) made it to Brittany.
And when the train back on Monday morning was cancelled too (quelle surprise), I realized that rather than being stuck in Brittany forever, all I had to do was find another train going in the same direction (although the SNCF didn't send an email this time).
I shudder to think how difficult all this would have been for those not capable of racing along busy train platforms.
But still, just because the SNCF have had a week of headache-causing protests, it's worth mentioning that France has not completely ground to a halt. And it's worth noting the rolling Paris transport strikes haven't even affected the Metro. Oh, and there is still petrol available by the way.
If you're prepared, and don't mind a bit of discomfort, you can probably make it to your destination anyway. You just have to be ready to do as the French do and take things with a pinch of salt and a Gallic shrug.
At this time of year I could imagine much worse fates than being stuck in Brittany or some part of France for a few days longer than planned.
Granted when thousands of football fans descend on the country from Friday onwards, it may get a lot more chaotic, but there are hopes the dispute will be called off by then.