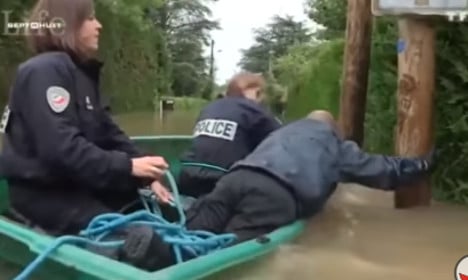 Three police officers get in a boat… It sounds like the setup for a great joke. But the video is punchline enough.

On Sunday these three police officers were on their way to make sure no residents were still stuck in their homes in Chartrettes en Seine-et-Marne, south east of Paris.

To be fair they were brave enough to commandeer a boat and three shovels (Having paddles would have been far too easy) and set off in front of a group of their colleagues who were happy enough watching on.

But the current clearly took them by surprise and boat started taking on water and things went really down river from there. Unfortunately for them their struggles were caught on camera by a film crew from French channel TF1.

The clip was part of a report broadcast on Sunday evening and needless to say it became an instant hit and has been viewed millions of times on line.

The letters “MDR”, the French version of LOL (laugh out loud) accompanied most tweets and Facebook posts. The question everyone is asking is if they had rescued someone, how would they have fitted them in the already overcrowded boat?

Or perhaps, did they even really need a boat? When you see them fall out, you'll get it.

Perhaps there was just no time to think about these issues.

See for yourself why.

Here's the Titanic version created by one web user who clearly enjoyed spending the time making it.