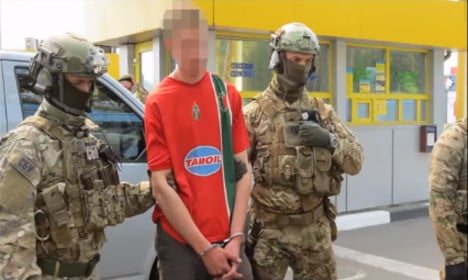 What was the plot?

According to the chief of Ukraine’s intelligence agency SBU, a Frenchman was planning to carry out as many as 15 terror attacks “before and during Euro 2016 , which starts on June 10th and runs until July 10th.

Who was the man behind the alleged plot?

He has been named in France as 25-year-old Gregoire Moutaux, though his name has not been officially confirmed. He comes from a little village in eastern France called Nant-le-Petit, which is home to around 80 residents.

What do we know about him?

Moutaux worked as an “inseminator” for a local farming cooperative in the Bas-Rhine department, in the Grand-Est region of France near the German border. He often had reason to travel to Ukraine for his job.

In terms of his background the local prosecutor Dominique Pensalfini-Demorise described him as a “nice kid, intelligent, friendly and always willing to help”.

“He's a rather nice guy, who I think is actually rather well-educated. I've even invited him over for a glass of wine. I just can't understand this,” neighbour Jean-Jacques Renck told France 3 TV.

During searches of his police reportedly found a T-shirt bearing the emblem of an extreme right group in France. Some media reports that balaclavas and explosive materials were also found in his flat, although this remains unconfirmed.

The SBU’s Grytsak also said the suspect “expressed negative views about his government's approach to the immigration of foreigners into France, the spread of Islam and globalisation,” hence the reason this is being talked about as a possible extreme right terror plot.

How was he caught?

Grytsak said his service became aware in December that a French national had arrived in Ukraine and “began to establish contacts with a number of representatives in the (pro-Russian separatist) east.”

Ukraine's eastern war zone has been awash with arms since an insurgency against the pro-Western government in Kiev erupted in April 2014,

Grytsak said the arrest was made on May 21st when the man was trying to cross into Poland near the Ukrainian frontier town of Yagodyn.

The video below claims to show his arrest in Ukraine as he tried to cross the border. He was pulled out a car with another individual who has not been named.

How do we know he was planning terror attacks?

Other than the statements coming out of Ukraine, we don’t really know anything for certain about the alleged plot.

There were reports in France on Monday that suggested French authorities were actually skeptical about the claims from Ukraine.

The Interior Ministry in Paris was apparently treating them with caution. Tellingly France’s specialist counter terrorist investigators have not been put in charge of the probe.

Currently that is in the hands of the unit that deals with arms trafficking in the eastern city of Nancy. That suggests that for the moment the French still suspect the Gregoire Moutaux may just have been planning to sell the arms on the black market once he was back in France, rather than carry out the reported 15 terror attacks.

Nevertheless it is expected that the French authorities will demand the suspect be extradite, after which more will become clear.

Is there a real terror threat from the far right in France?

Whether this turns out to be a confirmed plot by an individual with far right links or not, there is a clear threat according to French authorities.

In May the head of internal security in France Patrick Calvar spoke to lawmakers in the French parliament of the risk of terror attacks from the minority groups from the extreme right.

“Europe is in great danger,” Calvar said. “Extremists are gaining ground everywhere and we are in the process of moving resources to look at the ultra-right, who are looking for a confrontation.”

He told deputies that the threat from these groups was being taken very seriously.

“It is our responsibility to anticipate and block all those groups who would, at one time or another, try to trigger clashes among communities.”

French terror expert Jean-Charles Brisard told The Local on Monday that the details of the plot were worrying but said the French counter terrorist authorities will not underestimate the terror threat from the extreme right.

“They will not only be looking at the threat from Islamist extremists,” Brisard said.

He expressed caution saying it was far too early to speculate about the plot and the motives. But we can expect more information to be revealed in the coming days.