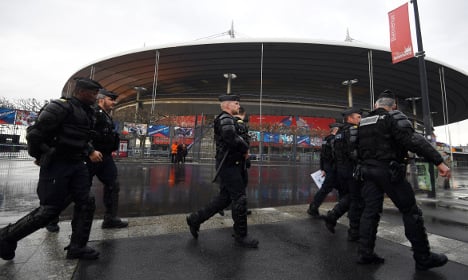 The Ukrainian intelligence services chief said a Frenchman, who was arrested on the Ukraine Poland border on May 21st with an arsenal of weapons in his car, had been planning to carry out a wave of attacks before and during Euro 2016

According to Vasyl Hrytsak, head of the SBU agency said the 25-year-old Frenchman, named as Gregoir Moutaux, was allegedly intended to attack places of Muslim and Jewish worship as well as public buildings in France.

“The SBU was able to prevent fifteen terrorist acts that were planned in France on the eve of and during the European Championship football,” said Hrytsak on Monday.

He was against France's policy of allowing in migrants, the spread of Islam and globalisation” said the SBU's Hrytsak.

Details of his arrest were posted online in a video by the SBU. (see below)

However French authorities are apparently a little more skeptical about whether the Frenchman actually intended to carry out terror attacks.

According to Europe1 the Interior Ministry in Paris is remaining cautious. Specialist French counter terror investigators have not been drafted in to take charge of the investigation as would normally be the case. Instead the probe is being handled as suspected arms trafficking.

According to reports in France the farm cooperative worker may have had links to extreme right wing groups.

A day after his arrest in Ukraine, authorities in Moselle, eastern France where Gregoire M is from, opened up an investigation in the arms trafficking. (The Frenchman's cache of arms that were seized by  the SBU.

A raid was carried out at his home in Nant-le-Petit where reports say that officers found a t-shirt bearing the name of an extreme right wing group as well as several elements used in making explosives, although this remains unconfirmed.

A source close to the investigation said Gregoire M was not known to  the police or any intelligence services in France. Neighbours told local newspaper Est Republicain that he was “polite” while colleagues described him as “exemplary”.

The same French source however said there was initially nothing to suggest he was planning terror attacks and that his motivations appeared to be purely about trafficking arms. But French investigators complained they had had little concrete information from their Ukrainian counterparts.

France has remained on high alert since the terror attacks of November in Paris, when jihadist gunmen and bombers killed 130 people.

With the month-long Euro 2016 tournament kicking off on Friday the government are to mobilize some 9,000 police and security personnel in a bid to maintain maximum security.

On Sunday president François Hollande acknowledged there was a threat of an attack during the Euro 2016 football championship but said the country must not be intimidated.

He also issued an appeal for a halt to transport strikes that threaten to disrupt the month-long football extravaganza opening on Friday.

“This (attack) threat exists,” he told public radio France Inter. “But we must not be daunted.

“We must do everything to ensure that the Euro 2016 is a success.”

The United States warned last week of the risk of attacks, with the French stadiums hosting the matches but also the so-called fan zones where spectators will be gathering in large numbers potential targets.