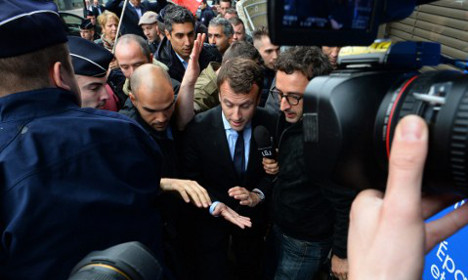 The 38-year-old former Rothschild banker regularly polls higher than France's deeply unpopular president and prime minister, and has recently been accused of harbouring a desire to be president.

But the reform-minded Macron has irked leftists, and angry union activists yelled at him to “get lost” and threw eggs at him when he went to an event in a Paris suburb.
“They don't listen, they insult,” said the minister, with egg yolk in his hair.
Macron said the egging was the work of “professional agitators”.

Last month the minister was caught on video in a heated exchange with two members of the powerful CGT union, telling one of them “the best way to afford a suit is to work”.
“But I dream of working, Mr Macron,” one of them retorted.
The context of Macron's comments were not clear from the video which sparked outrage and appeared to be behind the angry reception he received on Monday.
“Rather on strike than in a suit,” read a sign held up by the protesters.
The appointment of Macron in 2014, with a firm agenda to reform the moribund French economy, saw Socialist President Francois Hollande accused of shifting to the right.
In 2015, Prime Minister Manuel Valls had to force Macron's economic reforms through parliament to avoid leftist rebels within the party sinking the bill aimed at reviving the economy.
This time around it is a set of labour reforms infuriating the country — which the government argues will boost employment, but unions fear will erode job security.
The Socialist government received a dismal 10 percent popularity rating in polls last week.