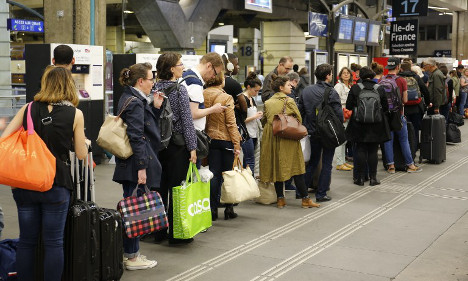 There was some slight improvement in the number of services on Monday, with six out of ten high speed TGVs and regional TER trains running, according to rail operator SNCF.

However Intercité trains were still hugely disrupted with only one in three trains running and in the Ile-de France region around Paris only 50 percent of the Transilien services operating.

Rail workers staged demonstrations at the Montparnasse train station to the south of Paris, blocking trains for around half an hour, while chanting and throwing smoke bombs. They moved on at around 2.30pm.

The RER B line, which serves Paris's two airports, has also been affected by the ongoing strikes, with air passengers advised to give themselves plenty of time to get to either Orly or Charles de Gaulle airport. The French government is desperate to end the strike, which is costing SNCF €15 million to €20 million each day, before the start of Euro 2016 on Friday and Monday looks like being a crunch day.

Ministers met with unions CGT-Cheminots and SUD-Rail later in the afternoon in the hope of negotiating an agreement.

On Sunday President François Hollande called for an end to the strike.

“No-one would understand if the trains or the planes… prevented the smooth transport… of spectators,” Hollande said.

“I want this (labour dispute) to be resolved,” he said.

The strikes are motivated in part by the SNCF workers' opposition to the labour reforms bill, but also their battle to ensure their working conditions and pay do not suffer as SNCF prepares to open itself up to competition in the years to come.

Workers in refuse collection centres and refineries are also being called out in the coming days in a bid to have the contested labour laws scrapped.

Air France pilots, in an internal conflict within the airline, are threatening to start a four-day strike on June 11th when the Euros are in full swing, and a major protest is planned in Paris on June 14th.