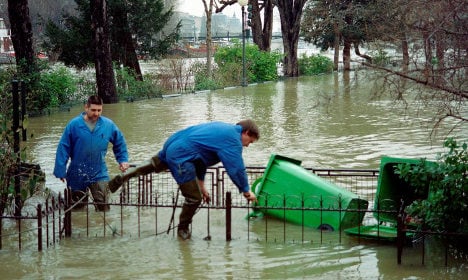 The water pumps have been drafted into Paris and elsewhere, while towns across the north are facing a huge clean-up operation after the “devastating floods”.

The floods in France have taken their toll. President Francois Hollande described them as a “real catastrophe”.

As well as four deaths and at least 24 injured, the bill for the damage caused by rivers such as the Seine, the Loing and the Yonne breaking their banks is expected to be anything between €600 million and €2 billion.

On Monday a crisis meeting will take place among government ministers to determine the real impact of the floods and how to aid the recovery.

The Prime Minister Manuel Valls will also hold a meeting with France’s biggest insurers to make sure the victims of the floods are compensated for all their losses.

Even before then he announced that an emergency fund containing several millions of euros would be set up to offer financial aid to those who have lost everything.

This week the areas worst affected will be declared “natural disaster” zones, meaning residents and businesses will find it easier to claim on insurance. As the flood waters of the Seine receded in Paris on Monday to around 5.38 metres above its normal height, after reaching 6.10 metres on Friday night, authorities were in a race against time to get the river banks open before the start of the Euro 2016 football tournament.

The normally busy roads and walkways that pass along the river remained closed, and will do for some days. Flooded riverside bars and restaurants and those located on barges will desperately be hoping they can reopen before the massive influx of visitors for the tournament.

Several train lines were affected, including the RER C, which remains closed along the River Seine. It’s not expected to reopen for several days. St Michel Metro station is also shut due to the floods.

France’s famous museums, the Louvre and the Musée d’Orsay, will remain closed until Tuesday at least.

But it was outside Paris that the real damage took place, especially in the départements of Loiret and Seine-et-Marne.

Thousands of residents in towns such as Nemours and Montargis saw their homes submerged while shop owners were also left counting the costs as the town centres were inundated by the floods. Many are still unable to return home.

Hundreds of cars were submerged before their owners could get them to higher ground, while scores of vehicles that became blocked on the A10 motorway were being cleared on Sunday.

On Monday morning orange alert warnings from the country’s weather service Météo France were still in place for 14 départements – mainly in the Ile-de-France region around Paris and Normandy.

More storms and rain are due, but authorities do not believe flood levels will be affected. In Rouen, further downstream from the Seine from Paris, the water levels were also receding after at one point hitting 9.3 metres above normal levels.

Some of those worst affected were French farmers, many of whom saw their crops and their potential harvests ruined in the flood.

France’s environment minister Segolene Royal called on towns and villages to be fitted with sirens in future so residents can be warned of future floods.