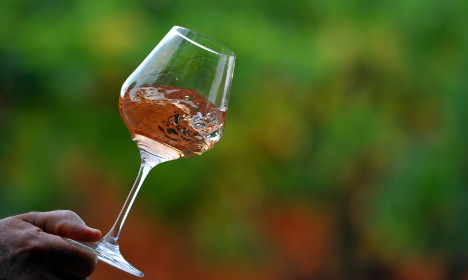 Would Sir and Madam care for red or white with their meal to appeal to their exacting, traditionalist palates? After all,
pink is surely plonk — or is it?

France's winemakers are waging a low-level war to strike down such traditional snobbery in the face of intense global competition for market share.

The industry has been on the back-foot since Italy leapfrogged France to regain top spot in the global production rankings last year, according to latest data from the International Organisation of Vine and Wine (OIV).

But the French have a powerful weapon in their armoury. Rose.

Worldwide sales of French blush wine have grown by nearly a third in ten years, driven by an explosion in demand from the USA where imports of rose from the Provence region increased 58 percent last year, according to the Provence Wine Council (CIVP).

Worldwide rose production grew just 15 percent between 2002 and 2013 while French winegrowers spotted the trend, boosting their output by 31 percent in the same period, according to the CIVP.

Though France remains the world's foremost consumer of rose, pulling corks on some eight million hectolitres (176 million gallons) in 2015 alone, its booming popularity in the US has been a major boon for French winegrowers.

“Americans have totally integrated rose into the wine family,” said Olivier Brun, who along with his three brothers runs a family vineyard at Chateau Brigue, at Le Luc-en-Provence in the southeastern Var region. “It's easily accessible and there's no need to be an expert to enjoy it,” he said.

Some 70 percent of the Brun family's sales are exports — half of them to the United States — “our top market,” where Florida, California, New York and, latterly, Chicago lead the way.

“Over there, rose is drunk in all seasons even in colder cities,” said Brun. “And it flows all summer long in the chic Hamptons,” the Long Island retreat of wealthy New Yorkers.

“Rose sales to the United States began to take off a decade ago thanks to (marketing) efforts by large estates such as Ott and Chateau de Peyrassol, a small pioneer,” says Brun.

This year is already on track to be record breaking. Brun's January through April sales topped those for the whole of 2015 — “200,000 crates, and 70 percent to the United States”.

French roses are strongly associated with the southern Provence region where the climate, grapes and soils are just right for rose which makes up the majority of the region's overall viticulture.

Provence is home to 600 producers who hold 39 percent of coveted “registered designation of origin” (AOC) certificates.

Provence and its produce have had their global profile raised markedly by British writer Peter Mayle's best-seller “A Year in Provence” that describes life in the region's lavender-scented countryside.

Provencal rose has also been lifted by the “Jolie-Pitt” effect following Angelina Jolie and Brad Pitt's purchase of the Chateau de Miraval (see photo below), complete with a vineyard capable of producing a fine and balanced nectar — including a light, flinty and highly-acclaimed “Pink Floyd” rose.

The English rock band of the same name notably recorded part of their iconic album “The Wall” in a studio at Miraval. Dufavet says that producing a top rose is an art-form requiring the utmost precision, so much so that in 1999 a rose research centre was opened at Vidaudan in the Var in order to seek out wine of “optimal quality”.

Their work has borne fruit, according to Dufavet, in the form of “pale, elegant colours much cherished on the American market which we have managed to control without affecting its aromatic and taste qualities”.

Roses are made when red grape varieties are harvested via a short maceration (soaking) period, while the technique of direct pressing may also be used once grape skins have been stripped or punctured before the juice is sent for fermentation.

The saignee or “bled” method sees juice bled off from nascent reds and placed in a separate vat.

“You have to be able to get up at the dead of night (to check on the brew's progress) — it's a little like the ultra-precise cooking of a grand chef,” said Philippe Faure-Brac, voted the world's best sommelier in 1992.

Faure-Brac says technical mastery and a seductive image will continue to fuel the booming appeal of roses which are “much less intimidating than whites or reds”.