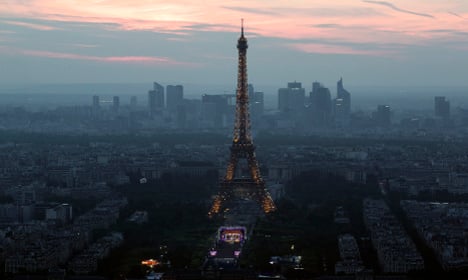 Watching the Games in Paris

Public Viewings: The Fan Zone in Paris will have space for 120,000 supporters and will be situated on the Champ de Mars, below the Eiffel Tower. Aside from endless photo opportunities, there you will find entertainment, a stage for concerts, a village by the sponsors of the cup, places to eat, giant screens, and much more.

Sports and International Bars: Looking for somewhere to watch the match and sample some local brews? Depending on how local you want the brew to be, you can head straight over to The Bombardier which is – you’ve guessed it – an English pub serving a full range of English ales and bitters on draught. Its renowned for getting rowdy during England fixtures, and we are sure there will be a sizable crowd quenching their thirst throughout the tournament. The biggest sports bar in Paris is Le Players, with two floors offering standing and seating space so you can comfortably grab food there too. They have over thirty screens throughout the bar, and its guaranteed to be packed full of every nationality at all times of the day.

Parc des Princes: The Parc des Princes is located in the southwest of Paris, just two and a half miles from the Eiffel Tower, and can hold49,000 fans. Home to Paris local legends PSG or Paris Saint-Germain, this more central stadium features some epic upcoming Euros matches.

The Catacombs: Delve into Paris’ dark underworld and tour winding tunnels lined with thousands upon thousands of skulls. In the eighteenth century, bones from over-filled cemeteries were transferred to underground quarries, by night in carts followed by a processions of singing priests. Ever since these Catacombs of Paris have been an object of curiosity for Royalty and citizens alike and even Napoleon had a snoop around.

Monet’s home in Giverny: For a real escape from the city, why not drive out to Giverny a traditional,beautiful French village just an hour and a half from central Paris. In this small place you can take a walk around the house and gardens that were once home to Claude Monet.

Versailles: Not had enough of the French Baroque buildings and in Paris? Well then, take the short 45 minute drive out to the Palace of Versailles, where you can gawp to your heart’s content at the lavish and unprecedented splendour of Louis XIVs ‘ancien regime’ – and ego.

Local Delicacies: The king of ham and cheese toasties, the Croque-Monsieur, was originally crafted in Paris and is still beloved by the nation. For ultimate on-the-go comfort food, bite into the crisp fried bread dripping in melted cheese and stuffed with lashings of ham. Or opt for its ladylike counterpart, dubbed the Croque-Madame, topped with a golden fried egg. For those with a more sizable appetite, be comforted in the knowledge that steak-frites (exactly what it sounds like: steak and chips) is a quintessential dish that is sold almost everywhere. For dessert grab somemacarons or a veinnoise: the former are almond-based round cookies that are delicate and sweet, whilst the latter is a soft, sugary bread that’s at its best when filled with chocolate chips. Of course, the ultimate late night snack in Paris is a crepe. Eat it sweet or savoury, street vendors can be found all over the city making these soft treats long into night.

Embrace the Culture: To many people Paris is the apex and embodiment of French culture; it’s got the food, the architecture, the fashion. As a city on the global stage it is undoubtedly influenced by international tourists and tastes, and there are few things you may want that cannot be found here.

In France, all roads lead to Paris. With a great motorway network spanning out around it, from the capital you can reach any destination north or south easily. Equally, its no more than a few hours drive to any one of the port crossings on the coast, meaning travel to and from the UK is a breeze too. With a car in Paris you are free to tour the city and its surrounding areas, as well as chase the football across the other venues. With the freedom and ease of having your own vehicle, there’s no need to get caught up in the crowds on the metro or at Paris’ central stations.

Matches at the Stade de France

This city guide was put together by hire car company Sixt. For more information about hiring cars, click here.