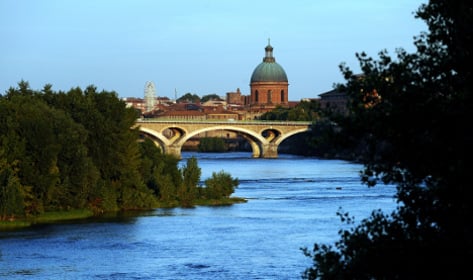 The Stadium: The Stadium Municipal de Toulouse, also known as ‘mini Wembley’, has just undergone a facelift to be up to scratch for Euro 2016. The stadium holds 33,000 and also plays host to rugby games for the top-class local team. One star not typical for this green stage is Michael Jackson, who played a concert to 40,000 during his Dangerous World Tour in 1992. Public Viewings: Each and every host city of the UEFA 2016 will have a Fan Zone set up where football fans of all nations can join together in the open air to watch the matches. The fan zone in Toulouse will be at the Allée Jules Guesde with a capacity of 30,000.

Sports Bars: Take a pit stop in the plush interior of the Melting Pot, an Irish pub by nature. Sip the frothy Guinness on tap pulled by the jolly staff and settle in to watch the game surrounded by home comforts.

Get Out & About in Toulouse

A cultural hit and fascinating to boot, the Cite de l’Espace is a must-see for all explorers. Marvel at the miles of exhibitions, real space craft, 5 hectares of gardens, immersive IMAX 3D cinema and the Planitarium and its similators that all reveal the wonders of the Universe.

Fancy a trip around a slick track in latest-generation go-karts? Race you to Karting Montaudran, just a 20 minute drive south of the centre . Feel the power as you screech around tight turns and have your time measured to the thousandth of a second.

Walk on water with the Ski Club de la Peniche, a water skiing club located in the historic centre of Toulouse. Zoom by grand architecture on your choice of board, skis or large buoys where everyone can get aboard. The lovely folk that run the club also bring out the BBQ and grill waterside on balmy summer nights.

Local Delicacies: Toulouse sausage is the regional speciality of South-West France and carries a prestigious red label. There are tons of copycats sold in the UK that try to replicate its meaty deliciousness. For once get your teeth into the genuine article, only sold in a handful of markets in central Toulouse.

Embrace the Culture: Toulouse’s natives are avid sports fans as their rugby team, Stade Toulousain, is one of the finest rugby clubs in Europe. Eager to show their sportsmanship and proud of their beautiful town, you can expect a warm welcome from the people of Toulouse.

Residents and travellers alike relish driving in Toulouse as its well-connected road network and underground parking make the journey a breeze. Brush off the sticky heat of a tour bus and get behind the wheel to have perfect freedom. Cruise by and tick off the sights such as the Cathédrale St-Etienne, the Museum of Natural History and even drive over the Pont Neuf, one of the most beautiful bridges in France. Once you’re clued up on how to drive in Toulouse, you can take to the country roads and make the 2 hour drive to the west coast. Here the yellow sands of the Portigragnes and Serignan beaches brush the sublime blue oceans of the Mediterranean.

This city guide was put together by hire car company Sixt. For more information about hiring cars click here.