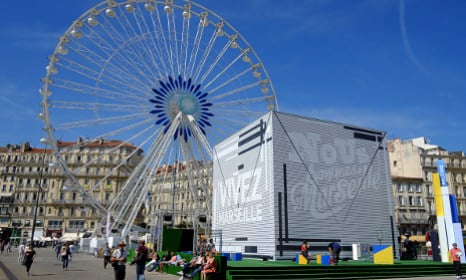 The Stadium: The Stade Vélodrome has a capacity of 67,000 and a new roof to shield fans from bad weather. Standing in the south of the city, the Vélodrome has hosted two world cups and is the second-biggest venue this year.

Public Viewings: The Marseille Fan Zone will be set up on the Prado beaches, not far from the Stade Velodrome. It will have a capacity of 80,000 people and will be broadcasting all the matches of the tournament on an enormous 160m² screen. There will be a number of shops in the zone as well as food outlets, and even live music played in the evenings. It will be open to all, free of charge, from 10th June to the 10th July.

Sports/ International Bars: On account of the city’s love for football, there are a number of places to catch the games. The OM Brasserie has 13 television screens, and is a local favourite – don’t expect a seat though! Look out for signs in the window of bars with the words ‘transmission en direct’ meaning Live Transmission. For those seeking some home comforts and English speaking bartenders, then head to Pub O’Malleys where sport is played on the TVs throughout the day and the walls are adorned with football jerseys.

What Teams are Plaing in Marseille?

Get Out & About in Marseille

Vallon des Auffes: Take a stroll through this beautiful old part of the city which manages to capture the timeless feel of its shipping village history. Quiet and peaceful, it’s a great way to soak up some local culture before heading back into the more touristy centre.

Trip to Cassis: Less than an hour’s drive from Marseille, the small town of Cassis is an absolute paradise. Smaller and quieter than its neighbouring city, there’s a marina with bars and restaurants and even the small Bestouan beach to soak up the sun.

Snorkelling in the Calanques National Park: After all the sun and football you may need to cool off a bit, in which case why not take a dip in the calanques (meaning ‘inlets’) that lie just off the coast to the east of Marseilles. Rent snorkelling or kayaking equipment and see all of the sea life lying just a few feet below the water.

Local Delicacies: The essential dish to try in Marseille is Bouillabaisse, a fish soup served with potatoes, croutons, and cheese. If you're looking for a light bite then get your hands on a 'Panisse' – a pastry that is served either sweet or savoury, or a 'Navette' – the local biscuit of choice. Of course, you can always do as the French do and pick up a baguette for lunch with an assortment of meat and cheese to fill, or snack on a crepe.

Embrace the Culture: The French National anthem is named The Marseillaise in honour of the troops who marched from the city to Paris during the French Revolution. You’ll also notice that the locals are fanatical about football: don’t forget to leave without paying tribute to their local team the Olympique de Marseille!

With a car hire in Marseille then you are free to explore at will. Enjoy the view as you drive, with the A55 road approaching the city basking in the coastline view.  Luckily with your car hire you won’t have to worry about getting around, which is a blessing as the public transportation system is not well connected and closes early. There are no trams or metro trains, only buses, so expect a long wait if you intend on relying on local transport. It is likely there will be more traffic than usual, especially around the train stations where crowds will create congestion, so it would be advised to keep your car out of these areas on match days.