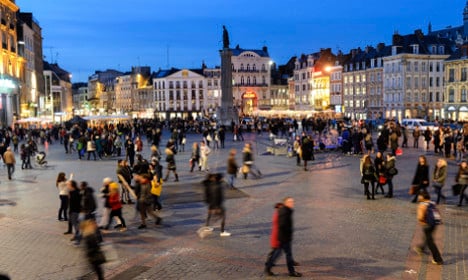 The Stadium: The Stade Pierre Mauroy has a 50,000 capacity and has hosted various sports tournaments, including the 2014 Davis Cup. The stadium has some incredible features, including a retractable roof, and a mechanism enabling half of the pitch to be raised and slid directly over the other half for use as a concert venue.

Public Viewings: The fan zone in Lille will be located at the Place Francois Mitterrand throughout the tournament with a 30,000 person capacity. It will have multiple screens screening the games happening across France and will be hosting various entertainments alongside.

Sports/ International Bars: If you’re looking for a place to watch the game in Lille, then head to MacLarenswhere you can get some great Northern French fast-food while taking advantage of the big screens around the bar. O’Scotland nearby is a Scottish themed bar, which is generally less busy than its Irish neighbour and offers cheap pints, a dartboard and a few TV screens. There is certain to be a great selection of beers on tap and a very familiar feel, as with much of the town the red brick terraced buildings could fool you into thinking you were back in the UK!

Get Out & About in Lille

Walk Around the Old town: Find the time to take a walk down the Rue de Bethune and see the traditional shop fronts on this famous old high street. Head to the Grand Place to sit and grab a drink from one of the many bars on the square, and take in the historic scenery in comfort. Just next door is the Old Stock Exchange, which is one of the most iconic buildings in the city.

The Citadelle of Lille: This massive star-shaped fortress dates back to 1667 and is made from some 60 million bricks. It is still a functioning French and NATO military base, but tours are available on Sundays. Located just in the northeast of the city, you can still easily visit any day of the week to walk around.

Drive into Belgium: With Belgium so nearby, why not make the short trip over to visit? The town of Ypres is just a 40 minute drive away from Lille, and aside from being a stunning traditional Flemish town, it is also of huge historic importance. Visit one of the many WW1memorial sites, such as the Hooge Crater, or simply take a drive around the surrounding countryside.

Local Delicacies: Given Lille’s northerly position on the border, the local food has both French and Flemish influences. If you’re after a big, hearty meal you have to try ‘Carbonnade Flammande’: a stew of beef slow-cooked in beer, which you can find in any traditional tavern or ‘estaminet’. Of course, ‘moules-frites’ (mussels and chips) is famous all along the north coast, but don’t worry if you’re not so keen on the mussels part, as good chunky chips are to be found all over town. For something sweet after, grab some ‘gaufres’ – thin filled, buttery waffles. Naturally, all of this can be washed down with a great selection of beers: amber, dark or white beers from the region are typically strong tasting and high alcohol.

Embrace the Culture: Lille is a laid-back and unpretentious city. It has a great mix of cultures on account of its position in old French Flanders, and hosts Europe’s biggest flea market every September attracting over 2 million visitors.

If you are travelling through the region by car then you’ll be lucky enough to witness the great scenery and smooth open roads around Lille at your own pace. If not, then there are two metro lines in the city but unfortunately they don’t route to the stadium. There is a night service of buses, which operate in the evenings from 9.30pm and run every half hour until 3am, however these are the only viable public transport options so plan carefully before you travel. With a car hire in Lille you can drive directly to the stadium in less than 20 minutes, and it is sited next a major road leading north and another which takes you directly into the city.

This city guide was put together by car rental company Sixt. For more information about hiring cars, click here.