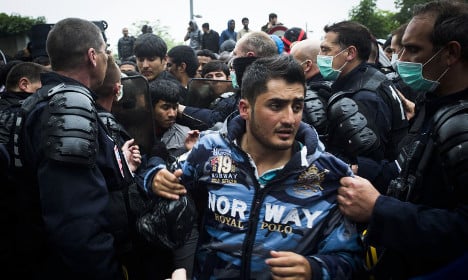 Anti riot policemen wear facemasks as they control the evacuation of the migrants camp in northern Paris. Photo: AFP
Police descended on the Jardins d'Eole in the 18th arrondissement of northern Paris at around 7am on Monday morning.
The migrants had lived for several weeks at the park, which is just a stone's throw from the Gare du Nord train station (see map below).
Those in the camp, who were mostly from Afghanistan, Sudan, Somalia, and Eritrea, were escorted into a fleet of buses at the scene. Photo: GoogleMaps
Paris Mayor Anne Hidalgo said the camp had been home to 2,000 migrants, who will be rehoused at around 60 locations, mostly in Paris.
Early reports suggested that there were 1,300 migrants at the camp, but hundreds reportedly showed up in time for the evacuation on Monday morning in bids to get relocated.
Local officials said that it was the 23rd operation of its kind in Paris since June last year.
Such scenes at the Jardins d'Eole might soon be a thing of the past in Paris, with an official migrant camp that meets UN standards scheduled for construction in the coming weeks.
Hidalgo announced last week that Paris that the camp would be built at an as-yet undecided location in the north of Paris. Migrants at the camp just days before it was evacuated. Photo: AFP
“I hope that the centre will be a welcoming place to evaluation these people's situations, and also a site that allows the lodging of those in need,” she told reporters on Tuesday.
Paris has struggled to cope with the numbers of refugees and migrants arriving in the city over the last year or two, with hundreds sleeping in makeshift camps that spring up before being closed by police.
Hidalgo said that kind of arrangement was no longer tenable, and that she wanted a humanitarian camp built along the lines of the one at Grande-Synthe near Dunkirk, northern France (see photo). Photo: AFP
A separate planned shelter has proved contentious in Paris, however, after it was announced that it would be built in the 16th arrondissement, one of the city's poshest neighbourhoods
The centre, planned to house 200 homeless people from this summer, sparked fears among locals that housing prices would tumble and potentially turn into something like The Jungle camp in Calais. Over 50,000 people have so far signed a petition to block the move.

The planned shelters for the 16th arrondissement. Photo: Moon Architecture