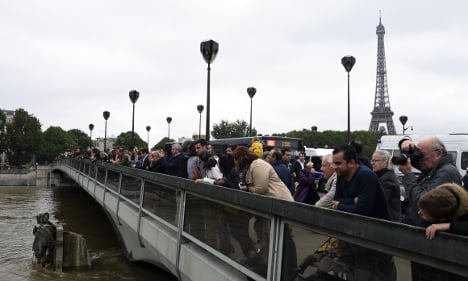 Although city authorities warned people not to venture near dangerous parts of the river, crowds gathered on bridges to snap pictures of the dramatic sight. Photo: AFP

From a peak of 6.10 metres (20 feet) in the early hours of Saturday, the river began to subside, falling to 5.77 metres at 8am (0600 GMT), the environment ministry’s Vigicrues flood watch website said.

However, red alerts had been issued for the Seine-Maritime and Eure departments in the northern Normandy region but were lifted early Sunday and they passed on to the next level of orange.

Alerts have also been issued in 15 other regions, including Ile-de-France, where Paris is located, Lorraine in the northeast as well as parts of the country’s central areas. Meteo France has forecast showers on Sunday across much of the country.

The authorities in Seine-Maritime said there had “been no significant damage so far”.

Traffic has been prohibited in some areas of Normandy and although the Seine had risen in the northern city of Rouen, it did not break its banks.

“It’s like this when there are strong tides,” said a port official.

Across Europe, at least 18 people have been killed in floods that trapped people in their homes, felled trees and power lines, cut off roads and rail lines and forced rescuers to navigate swamped streets in lifeboats.

In Paris, the Louvre and Orsay museums, which sit on opposite banks of the Seine, were closed for a third day Sunday, after shutting their doors in a race to move art treasures out of basements to higher ground as a precautionary measure.

They are only due to reopen on Tuesday.

Although city authorities warned people not to venture near dangerous parts of the river, crowds gathered on bridges to snap pictures of the dramatic sight.

“We had to scrap plans for a boat cruise but at least we have some super photos.”

Pieces of driftwood, plastic bags and other detritus swept past in the muddy waters, which engulfed the city’s famous riverside walkways, a popular haunt of strolling couples.

“It is a reminder that nature is more powerful than man and we cannot do anything, only wait,” said Gabriel Riboulet, a 26-year-old businessman, as he took in the scene.

Two metro stations remained closed and services on a train line that hugs the Seine was still suspended in places. Boat traffic was also suspended.

More than 20,000 people have been evacuated over the past week from the Loire Valley and the greater Paris area.

The health ministry said nearly 500 patients from a dozen hospitals and 800 care home residents had also been moved.

Nationwide losses could reach more than €600 million ($680 million), according to Bernard Spitz of France’s association of insurers.

The head of national railways operator SNCF, Guillaume Pepy, said the rail network had suffered “catastrophic” damage which would run to tens of millions of euros.

French Environment Minister Segolene Royal announced a major flood exercise in coming weeks based on flooding on the scale of the 1910 calamity, when the river rose 8.62 metres in Paris.

President Francois Hollande meanwhile told Europe 1 radio that the cabinet would formally declare a “natural catastrophe” on Wednesday to facilitate payout by the insurance industry.

“There is also an agricultural calamity,” Hollande said.

“Many farmers have lost either their livestock or their vines,” he added.

The downpours have added to the gloom caused by months of protests and strikes over a labour reform bill that have continued in the run-up to the June 10th kick-off of the Euro 2016 football championships.