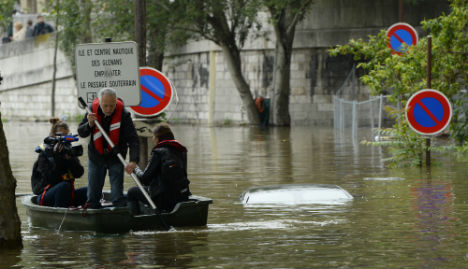 Journalists on a small boat navigate the waters near the Quai Louis Bleriot in Paris. Photo: Bertrand Guay / AFP
The rain-swollen river receded for the first time in a week after nearing its highest level in three decades, triggering a scramble to save artwork in riverside museums.
The Seine stood at 6.06 metres (just under 20 feet) above normal levels at 8:00am (0400 GMT), down from a high of 6.10 metres overnight, the environment ministry's Vigicrues flood watch website said.
The level was the same as that recorded on Friday afternoon, when the river rose to levels last seen in 1982, prompting emergency measures.
The famed Louvre and Orsay museums shut their doors in a race to move art treasures from their basements, some metro stations were closed and Parisians were advised to stay away from the Seine.
But by Saturday, as authorities were counting the cost of over a week of flooding in central and northern France, the spectre of devastating floods in the city had begun to ebb.
“We're now in the stabilisation phase, even if we could still get one or two centimetres more,” said Bruno Janet, head of modelling at Vigicrues.
The environment ministry on Friday forecast that the Seine would remain high throughout the weekend — but still far off a 1910 record of 8.62 metres — before starting to subside.
Across Europe, at least 17 people have been killed in floods that have trapped people in their homes and forced rescuers to row lifeboats down streets turned into rivers.
The City of Paris said it had opened two gyms to provide shelter for the homeless. More than 12, 000 people have been affected in the Seine-et-Marne department east of Paris, of whom more than 7,000 people were evacuated.
On Saturday, pieces of driftwood, plastic bags and other flotsam swirled in the muddy waters which had inundated the city's famous tree-lined riverside walkways, a popular haunt of strolling couples.
Firefighters warned people to keep away from dangerous parts of the river, but crowds gathered undeterred on Pont Neuf and other iconic bridges to snap pictures of the fast-flowing waters.
“It is a reminder that nature is more powerful than man and we cannot do anything, only wait,” said Gabriel Riboulet, a 26-year-old entrepreneur, as he took in the scene.
A small number of basement flats in the capital were flooded on Friday and a campsite in the Bois de Boulogne forest in the west of the capital was cleared but there was no order yet for any Parisians to evacuate.
Several metro stations were closed and workers piled sandbags on platforms to hold back the water.
Boat traffic has been suspended in the capital, as has a regional train line that runs along the Seine.
French President Francois Hollande said a state of “natural catastrophe” would be declared when the cabinet meets next Wednesday, a necessary step to trigger compensation payments.
Losses across France could reach more than 600 million euros ($680 million), said Bernard Spitz of France's association of insurers.
The head of national railways operator SNCF said the rail network had suffered “catastrophic” damage which would run to tens of millions of euros.
Persistently heavy rainfall across western and central Europe has swollen rivers and claimed victims from at least four countries.
Eleven people have been killed in the German states of Bavaria and Baden-Wuerttemberg, and two in Romania, while a beekeeper died in Belgium while trying to save his hives.
In France, a man on horseback drowned on Thursday after being swept away by a swollen river in Evry-Gregy-sur-Yerres, southeast of Paris.
At Montargis in the north-central Loiret region, police also said they had found the body of a woman in her sixties who had apparently drowned.
Environment Minister Segolene Royal said she feared more bodies would be found as waters receded in villages in central France, some of which have suffered their worst floods in a century.
More than 20,000 people have been evacuated since the weekend and around 18,000 homes are without power.
On opposite banks of the river, the Louvre and Orsay museums, which receive a combined total of 12.5 million visitors a year, closed their doors Friday so that artworks could be moved to higher floors.
Hollande paid a visit Friday to the Louvre, where dozens of volunteers were working to move some of the 38,000 artworks thought to be at risk to higher floors.
The museum said it would remain closed until Wednesday, while the Orsay, which houses a world-renowned collection of 19th and early 20th century art, said it would reopen Tuesday.
The Grand Palais exhibition centre also shut Friday, as did two of the National Library's sites.
Eva Palomares, a holidaymaker from the Italian city of Milan, said she was disappointed to be unable to visit the Louvre but added: “The star today is the Seine. You have to feel its angry rumble.”
The downpours have added to the gloom in France, where public morale has been hit by months of protests and strikes over a labour reform bill which were still gripping the country less than a week before it begins hosting the
Euro 2016 football championships.