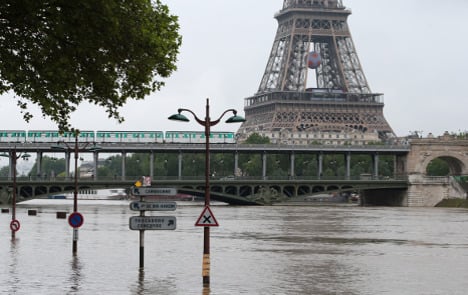 You have to spare a thought for the Paris tourism industry. First the bloody terror attacks, then the violent protests and strikes, and now the River Seine reaching its highest flood level in 30 years.

After the devastating Paris terror attacks, city authorities and tourist sites were forced to launch a new campaign aimed at persuading worried visitors to return.

Then just as tourists began to venture back, violent protests and strikes throughout the spring left hotels and tourism chiefs in the city lamenting another blow as concerned visitors once again began to have second thoughts.

Now they've been hit by the floods. While the flood levels of the River Seine will eventually recede, those who work in the tourism industry could have done without it. Mustafa, who owns a souvenir shop on the banks of the Seine, commented: “In the seven years I have lived here, I have never seen a season like this.

“I worry about whether tourism will pick up in the coming weeks. What with the terrorism, strikes and now floods, it's no surprise that there seem to be fewer tourists. It is the worst time to own a souvenir shop like this in Paris.”

It's not just those working in souvenir shops that have been affected.

One by one, museums are falling victim to the floods, even if they aren't exactly submerged under water.

Both The Louvre and the Musée d'Orsay have had to close, almost certainly until early next week in order to evacuate artworks to higher ground. On Friday afternoon the Grand Palais also announced it was closing to the public out of precaution.

With floodwaters breaching the banks of the Seine River, tourists have been greeted by thick grey clouds and emergency closures at must-see destinations in just the latest crisis to hit the City of Light.

“We were kicked out of the d'Orsay when it shut down four hours early yesterday,” art student Lani told The Local.
“I was extremely upset. Didn't even get to see the Van Goghs. And now that the Louvre is closed, we probably won't get to see that either.”
River cruises on the Seine have been cancelled as navigating the Seine has become impossible. Boats can no longer even pass under bridges.
But the main attraction in Paris was not the river itself.
Evan Thomas, a retired journalist from Wellington, New Zealand told The Local: “This isn't the kind of tourist attraction we expected to see. For us it's just an inconvenience. You feel for the people of Paris and France.”
Chloe, a tourist from China, said: “The river looks incredible so that's good. We have been taking selfies here for the past ten minutes.”
Nearby, Parisians pulled off the road and joggers stopped in their tracks to take pictures of the swollen river, as its muddy waters carried off branches and debris, and sightseeing boats were replaced by firemen whizzing past on speedboats.
Photo: AFP.
The water skimmed the city's iconic stone bridges, drowning walkways which at this time of year are usually the reserve of picnicking Parisians.
Some locals saw the freak weather as a chance to get philosophical.
“It's beautiful. It is a reminder that nature is more powerful than man and we cannot do anything, only wait,” said Gabriel Riboulet, a 26-year-old entrepreneur, as he pulled his bicycle over to take a picture.
Others were more concerned, such as Pascal Derby, 62, who works at a bank along the river.
“It is worrying,” he said as he took a photograph of the water rushing under a bridge.
His employers have restricted parking in the basement of the bank. In a city where much of the parking is underground, floods can be particularly deadly for motorists.
The situation is unlikely to improve until early next week. While flood waters are due to peak at about 6.5 metres on Friday night, they will remain high throughout Saturday and Sunday.
All being well, water levels should be back to normal by the time Euro 2016 kicks off on Friday June 10th. Tens of thousands of fans from around Europe are set to pass through Paris during the football tournament – just what the city needs.
Everyone in Paris, whether they work in the tourist industry or not, will be hoping nothing more sinister lies in store for the City of Light.