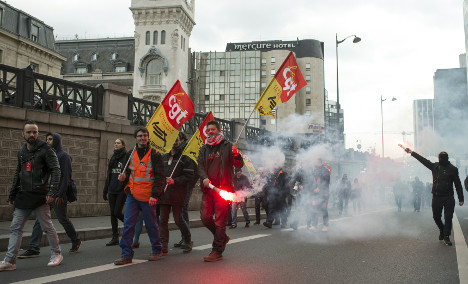 Trade unions were keeping up their pressure on the government on Friday as they continued to stage strikes in various sectors from rail to rubbish collection.

Labour Minister Myriam El Khomri said the government was “sorting out each of the situations one by one,” but they are running out of time with Euro 2016 kicking off in Paris on June 10th, one week from now.

The strike at France’s national rail company SNCF has been renewed for a third consecutive day, causing further disruption this Friday.

However the number of staff taking part fell to just above 10 percent, the SNCF rail operator said. That compares to 15.5 percent of workers who joined the walk out on Wednesday.

The fall in participation rate may have been linked to the fact that the union UNSA announced its decision to “suspend” its own call to strike after leaders said they were satisfied with “clarification” made ​​in the agreement with SNCF on Thursday.

The government has suggested it is confident of finding a deal to end the rolling strike over the weekend.

As for the impact on trains, that have already been hit by the floods, only 40% of Transilien commuter services were running and the same number of RER trains in the Ile-de-France region around Paris.

A third of the Intercités trains are working during the daytime. Half of TER and 6 out of 10 TGVs are still running.

International connections, like the Eurostar, are largely unaffected, except for the SVI to Italy and Ellipsos to Spain where only 30 to 40% of trains are planned.

In Paris, CGT Union has called on workers at Paris’ transport operator RATP to hold an indefinite strike over pay and against the labor law, that began on Thursday.

However the Metro, buses, trams and RER A were largely all working normally and the same is expected on Friday.

Although RER A are running a normal service, only 3 out of 10 RER B trains, which serve the airport, are running and on RER C there is disruption as a result of floods. The section of the line that runs along the River Seine between Austerlitz and Javel.

After five trade unions representing airport workers, including air traffic controllers, lifted their strike notice for this weekend, flights should run normally today, although some have fallen victim to the industrial action.

Air traffic was slightly disrupted on Thursday, including at Orly and in Lille where Air France had cancelled 10% of flights due to a strike by air traffic controllers.

Things may get worse in the air however with Air France pilots calling for a strike from June 11th for two to four days, that will coincide with the start of the Euro 2016 tournament.

“It would be incomprehensible if flights are halted in France” during the month-long event hosted by France, he said.

“Everyone needs to contribute to making Euro 2016 a success.”

Separately three unions representing airport staff in Paris called for a strike on Friday until midnight on Monday, however the movement should cause no impact on the normal operation of Paris airports.

It mainly concerns shop and reception staff and cleaners.

The strike by staff at oil terminals in Le Havre, which started on Wednesday, is expected to continue until Monday noon.

However, as of today, a minimum service is being provided by 17 employees who have been working and sleeping on the site since the start of strike action.

The port is responsible for importing 40% of France’s crude oil.

Household rubbish risked building up in the Paris region and elsewhere in the country in strikes against the government's labour reforms which are at the heart of the wave of industrial unrest.

Three of the four main refuse centres in Paris were blockaded by union activists.

A week after blockades and strikes left petrol stations running dry, the situation eased further as workers voted to resume operations at a major refinery at Donges, on the Atlantic coast.

The refinery will take between three and five days to return to full production, owners Total said, though others remained paralysed by strike action.