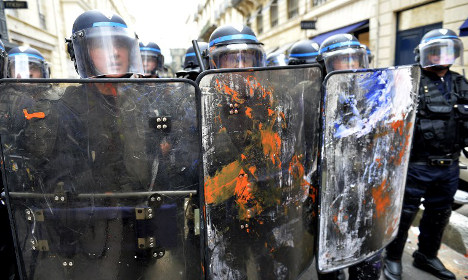 Paris police have come under the cosh from protests for several months. Photo: AFP

The Paris police chief has proposed that a fan zone in the heart of the capital be shut when Euro 2016 matches are played in the city's two stadiums.

Police chief Michel Cadot cited the “exhaustion” of overstretched officers and the threat of terrorism, in a letter to Interior Minister Bernard Cazeneuve seen by AFP on Thursday.

Paris is one of nine cities hosting the month-long football tournament from June 10 and a fan zone at the foot of the Eiffel Tower is set to accommodate some 90,000 supporters during matches.

In an earlier letter sent to Cazeneuve, Cadot also expressed concerns about other events during the championships, such as music festivals.

Former president and opposition chief Nicolas Sarkozy has called for the fan zones to be closed.

“We have other things for our police to do, with the current risk, than keep a watch on fan zones,” Sarkozy said.

The French police fears came after the US issued a warning of the “risk of potential terrorist attacks throughout Europe, targeting major events”.

READ ALSO: All you need to know about the Paris fan zone

However the party atmosphere of the European championships has been dampened by security fears and months of often violent protests and transport strikes in France.

Adding to the anxious climate is a row over racism in the national squad which has set off a wider debate in the country.

Karim Benzema, who is of Algerian origin, was excluded from the team over a sextape scandal, but on Wednesday accused coach Didier Deschamps of bowing to pressure from a “racist part” of France.

The country is already on high alert for possible terror attacks, and the gathering of tens of thousands of fans for the tournament is seen as a potential target.

In November, three suicide bombers blew themselves up outside of the national football stadium as part of a series of attacks on bars and restaurants in Paris.

Prime Minister Manuel Valls has said fan zones should be maintained unless there was a specific threat.