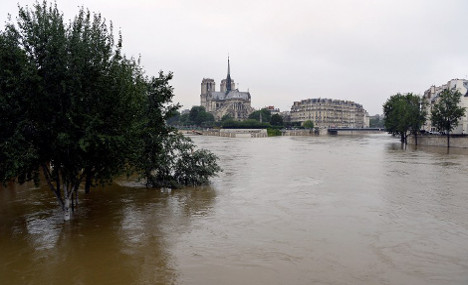 Photo: AFP
While Paris was preparing for the worst on Friday some towns in central France have already been hit by their worst floods in over a century, with more than 5,000 people evacuated since the weekend and around 19,000 homes without power.
In the capital, where flood waters were set to peak on Friday afternoon, officials have erected emergency flood barriers along the Seine, while the Louvre and Musée d'Orsay were forced to close to evacuate artworks.
The Seine is as its highest level since 1982 and most estimates say it will reach a peak of 6.2 metres higher than its normal level on Friday. Locals have been warned to stay away from the flooded banks although the floods have attracted hordes of people eager to get a glance at the swollen river.
We are still a long way from the 8.62-metre record reached in the devastating flood of the century back in 1910. (Photo: AFP)
On Thursday the floods claimed the life of a man on horseback who died after he was swept away in a river in Evry-Gregy-sur-Yerre, southeast of Paris.
The 74-year-old's body was recovered from the water by firefighters. The horse made its own way back to safety, police said.
France's Environment Minister Segolene Royal warned on Friday that when flood waters recede more victims of the floods may be discovered in flooded homes.
The Seine-et-Marne département, on the eastern edge of Paris remained on red alert – the highest alert on the system.
There are a further 12 départements across France on orange alert, the second highest level of alert in France, which urges the public to be vigilant an avoid unnecessary travel.
These include: Val-d'Oise, Hauts-de-Seine, Seine-Saint-Denis, Val-de-Marne, Essonne, Paris, Yvelines, Loiret, Cher, Indre, Indre-et-Loire and Loir-et-Cher.
While the river's swelling has so far caused little damage in Paris and is unlikely to submerge the city centre, public information boards urged those living near the Seine to clear out their basements.
Rescuers in the Parisian suburb of Longjumeau were paddling up streets in lifeboats, while in the town of Montargis, only the tops of cars could be seen peeking above the surface.
In Paris tourism has once again been hit, as river cruises were forced off the water, bars and restaurants along the banks have been submerged and the city's two famous museums the Louvre and the Museé d'Orsay have had to close for Friday, as workers evacuate artworks from the basement storage.
The owner of the partly submerged Baody restaurant near Austerlitz station told The Local: “This is terrible for us. I have no idea when we will be able to reopen.

“Yesterday we put the furniture on the tables, but today we will have to move it all to the river bank. It's a disaster for the business.”

The floods have also seen parts of the RER C commuter line shut down, with several stations closed to the public on Thursday.
Flood waters have also surrounded the famous château de Chambord in the Loire Valley. IN PICS: See just how high the River Seine has risen in Paris

Orlaith Finnegan, a PR consultant from Ireland who lives on the banks of the Seine to the south of Paris, was among those whose homes were evacuated.
“People here are surprised at how fast the river swelled after only a few days of rain,” she told The Local.
“We're a bit worried but as we live in a flood zone, but the houses are elevated so we're hopeful that it's just the basement that will get flooded.” Bookstore owners clear their devastated premises following floods caused by heavy rainfalls in Montargis, some 130 kilometers south of Paris. Photo: AFP
French President Francois Hollande has said that a state of “natural catastrophe” would be declared for the affected areas when the cabinet meets next Wednesday.

The water is creeping up the Zouave statue on the Pont de L'Alma. Above his knees!! pic.twitter.com/y97XWN7ynz