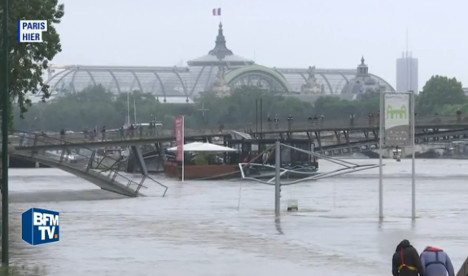 The Grand Palais at the top of the picture has now closed due to the floods. Photo: AFP

Flooding in central Paris has swollen the Seine river by 6 metres (20 feet) with a peak of up to 6.50 metres expected later, the French environment ministry said on Friday.

“The high-water level in Paris is expected tonight at around 6.30 metres (above its normal level), perhaps 6.50 metres in a worst-case scenario,” the ministry said in a statement.

“It should be noted that this is more of a plateau than a peak, since this level will remain relatively stable for the whole weekend before receding.”

The peak is expected to beat the levels reached during floods in 1982, when the river rose 6.15 metres above its normal level.

The record remains the 8.68 metres reached during devastating floods in 1910. The ministry also said it was possible that some residents in areas near the Seine in western Paris could be evacuated if necessary.

Those evacuations could take place at the campsite in Bois de Boulogne, as well as on the Ile de la Jatte, Ile Saint-Germain, as well as in the suburb of Rueil-Malmaison, the ministry explained.

Businesses along the banks of the River Seine are growing increasingly worried as the water rise.

“Of course we are worried,” Anna, a bartender at one bar near St Michel told The Local. “The river is just ten meters away.
“My boss and colleagues are afraid the water will get in the basement. We are checking every ten minutes. There's a lot of electricity down there in the kitchen.”
The manager of the Galway Irish pub on the river. “We can only wait. We are being very careful when it comes to the electricity.” The Local's Oliver Gee who is down on the banks of the River Seine said: “Water levels have very distinctively risen since Wednesday and Thursday.

“Loads of tourists and Parisians alike crowded along bridges watching the river pass quickly beneath.

“There has been large floating debris including plastic wheely bins and large logs. The roads that run alongside the river are closed off and traffic light pole are almost submerged.”

Transport in the city has also been hit by the floods. On Friday afternoon SNCF announced that the whole of the RER line C would be closed from Friday evening at 8pm, but then appeared  to back track.

The announcement came after part of the line was closed on Friday that runs along the River Seine between Austerlitz and Javel, which will remain shut.

Authorities have also had to close Cluny-La Sorbonne Metro station on Line 10 as well as St Michel.

With the banks of the Seine closed to traffic, driving in the rest of the city has become difficult with the capital more clogged up than normal.

The capital's normally booming tourism industry has been badly hit.

The rising waters have forced the Louvre to close while staff evacuate artworks from their underground store rooms. THe picture below showed artworks stored throughout the gallery.

French Culture Minister Audrey Azouley told journalists she and others were evaluating the situation “nearly hour-by-hour as we don't know yet the evolution of the level of the Seine River.”

Across the river the Musée d'Orsay has also closed for the same reason and announced on Friday that it will remain shut until at least Tuesday. On Friday afternoon the Grand Palais also announced it was closing to the public out of precaution.

“We were kicked out of the d'Orsay when it shut down four hours early yesterday,” art student Lani told The Local.
“I was extremely upset. Didn't even get to see the Van Goghs. And now the Louvre is closed we probably won't get to see that either.”
All river cruises on the Seine have been stopped until further notice.

But the main attraction in Paris was now the river itself.

Evan Thomas, retired journalist from Wellington New Zealand told The Local: “This isn't the kind of tourist attraction we expected to see. For us it's just an inconvenience. You feel for the people of Paris and France.
Chloe, a tourist from China, said, “The river looks incredible so that's good. We have been taking selfies here for the past ten minutes.”