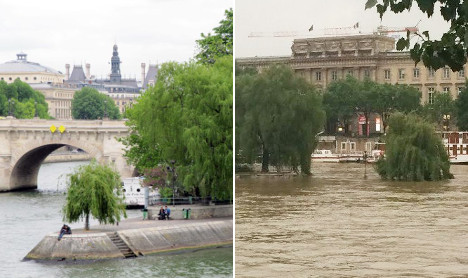 Photo: Alyse & Remi/Flickr and The Local

The Zouave statue, below, is traditionally used as a measure for floods. It stands 5.2 metres tall, with the water passing high above his knees on Friday morning. Here's another look at the Zouave on Friday, with the Pont de l'Alma behind.

Below shows the Square du Vert-Galant, at the edge of the Ile de la Cite. The lower section was completely covered on Wednesday night.

Here's some context for how high the water is in the River Seine in Paris. Two trees on the Ile de la Cite. pic.twitter.com/v46zsF8FR9

The pictures below, the second taken on Thursday, show that the entire top section of the park has now been covered too.

A third picture of this park, taken by The Local on Thursday night, shows that the water has since passed above the top of the entry gates seen in the picture above. The barges along the Seine in Paris are usually quite easy to get to, with gangways heading to the riversides.

But access is impossible now, at least by foot. The flood at the gates of Paris #inondations pic.twitter.com/jRAyQP03Vo

One striking difference has been the lack of cruise boats on the river, which have been forced to shut down as flood waters rise.

The river Seine is normally busy with traffic but as the photos below show there is not a bâteau to be seen right now. Below you can see how much the water has risen at the Pont Charles de Gaulle in eastern Paris.

The Pont Alexander III near the Eiffel Tower also looks different. The walking area to the bottom left of the picture below, which is where tourists queue for boats, is completely submerged. The Statue of Liberty, below, is impossible to visit now. The 22-metre tall sculpture that's a quarter-sized replica of the one in New York can be found on the Île aux Cygnes, a small artificial island in the 15th arrondissement. But you'll only be able to see it from a distance for now. Judging from this photo, it seems like it was a good call to close the Louvre in order to evacuate artwork stored underground.

In the summertime, some promenades along the Seine are transformed into makeshift beaches called Paris Plages…

Photo: Bénédicte/Flickr
…Doesn't look like they'll be ready anytime soon.
Photo: callicles/Instagram
Below you can compare the water levels with this view of the Pont d’Iéna and the Eiffel Tower. Photo: JPC24M/Flickr
The walkway area in front of the wall (behind the boat above) – is actually enormous. See below. Photo: dewet/Flickr
Now, this part of the promenade between the Tour de Eiffel and the Palais de Chaillot is now completely submerged, as are the supports beneath the arches of the bridge. Photo: Oliver Gee
Below you can see an impressive before and after of the Pont de Bir-Hakeim (made famous in the movie Inception) which connects the city's 15th and 16th arrondissements
Photo: Wally Gobetz/Flickr
Photo: AFP
The rise of the Seine is especially evident when you look at the Pont des Arts, shown below, a bridge that crosses the river next to the Louvre. Photo: Frédéric Dardel
Finally, the castle of Chambord, some 170 kilometers southwest of Paris, has now got a serious moat after the river Cosson burst its banks.