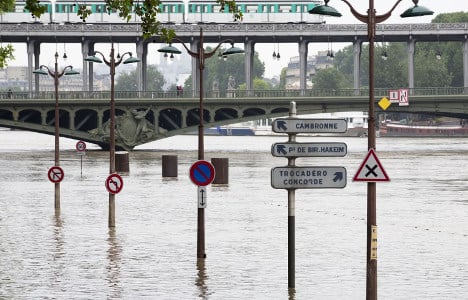 Photo: The Local
Flood waters continued to rise in Paris on Thursday as the French president François Hollande said that a state of natural disaster would soon be declared for the parts of France worst hit by the flooding.
Paris and much of the surrounding area were placed on Orange alert – the second highest level of warning – as flood waters continued to rise. The river Seine was expected to reach 5.75 metres higher than normal on Thursday evening, and up to 6 metres by midday on Friday.
If it were to reach 7.3 metres, then the city would switch to red alert.
On Thursday the famous Musée d'Orsay put its emergency “Protection Plan” into action before announcing it would close. A short while later the Louvre announced it was closing on Friday to evacuate its works.
Restaurants along the banks were forced to close while the transport authorities closed a section of RER line C and several stations, meaning more misery for strike hit commuters.
Over 40 different parks and public spaces in Paris were closed to the public because of the flooding, including the Buttes Chaumont park and the Père Lachaise cemetery in the east of the city. Rail operator SNCF decided to close the Saint-Michel station earlier on Thursday as part of its emergency response plan. The Invalides station was also at the point of being closed at around 2pm.
The service said that from 4pm the RER C, one of the main commuter lines that crosses Paris, will be closed on the section of the line that runs along the left bank of the River Seine.
The part of the line affected is between Austerlitz in the east and the stations Javel and Avenue Henri Martin in the west of Paris.

SNCF explained that with water levels expected to hit 5.75 metres later tonight authorities were forced to take action to prevent the flooding of the tracks between Saint Michel and Musée d’Orsay.

They have shut down four cooling vents located between the tracks and the river to avoid them being flooded, which has forced them to close the line.

Passengers are invited to take Metro Lines 10 and 6 as alternative travel.

RER C will continue to operate on the rest of the line, outside Paris. The news comes as much of central and northern France is flooding after torrential rain has fallen over the past few days.
French president François Hollande announced that a state of natural disaster would soon be declared for those parts of the country worst hit by flooding.

But while the situation was improving in other parts of the country, it was worsening ion Paris.

Parts of the right bank of the Seine were closed to vehicles and river traffic was halted out of precaution.

Restaurants and bars along the Seine were particularly badly hit by the flood waters.

The owner of the Baody restaurant, near Austerlitz station, that was partly submerged told The Local: “This is terrible for us. I have no idea when we will be able to reopen.

“Yesterday we put the furniture on the tables, but today we will have to move it all to the river bank. It's a disaster for the business.”

Men remove furniture from the Boady restaurant, the owner tells us this is “terrible” for his business pic.twitter.com/lyv7p5c1BN

Further down the river the owners of the restaurant La Barge du Crous de Paris, were equally dismayed.

“Luckily the restaurant is raised but we could lose lots of clients this week if the flooding doesn't recede. Just as the tourist season starts too,” the owner told The Local.

A policewoman directing traffic by the banks of the Seine nearby described the choas.

“There is terrible traffic because of the floods. Roads are closed. It's been like this for the past couple of days and the flooding just seems to be getting worse,” she told The Local.

An elderly Parisian man walking by the Seine told The Local on Thursday: “We have lived here for years and this is not the first time I have seen the Seine flood but it's definitely one of the most exceptional cases. We hope the waters stop rising.”

Flooding outside of the Quai de la rapée metro station (and the rain seems to be starting again) @TheLocalFrance pic.twitter.com/SF43UTcsP7

A crisis cell has been set up in the capital to keep an eye on the river and to prepare for any action if necessary.

Experts say Paris is still a long way from facing the catastrophe of the “flood of the century” – a repeat of the 1910 great flood.