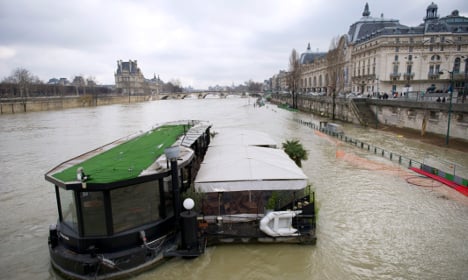 The river seine floods in 2013, but this would be nothing compared to what might happen. Photo: AFP

Earlier this year authorities in Paris held a preparation exercise in case they were hit by catastrophic floods. Here’s a timely look back at what happened.

Imagine much of the Metro system underwater, as well as a major train station, the Louvre gallery inundated, nearly one million homes submerged and millions of rats fleeing flooded sewers and basements.

That’s what authorities in Paris contemplated in March when they begin a mammoth two-week exercise to prepare for a once in a century flood, which experts believe is coming the French capital’s way.

It might sound like a Hollywood disaster movie but authorities in the French capital are taking the flood threat seriously, which explains the motive for operation “Sequana 2016”.

“This is the first time an exercise of this scale has been carried out over a region the size of Ile-de-France,” said Jean-Paul Kihl, secretary general of the Paris security and defense zone, who will lead the exercises with the aim of making them “as true to life as possible”. “It will help us improve coordination between the state, local authorities and the business world, but it will also make the public more aware. Because this will happen and so we need to prepare for it,” he said.

To give an idea of the how the nightmare scenario would affect the capital, the Paris region’s Urban Planning (IAU) has produced a series of 3D animated videos.

From Monday, a series of rehearsal exercises will begin which will simulate what would happen in the event of the River Seine flooding its bed and rising eight metres above its current level.

As part of the exercise, Metro stations will be walled up and sealed off to keep the water away from the platforms, radio stations will send out alerts, prisoners will be evacuated from a detention centre and Paris’s Musée d’Orsay will shift all its art works to a safe place.

Hundreds of police and firefighters will take part in the exercise as will the city’s hospitals, transport organizations and the electricity provider EDF.

The last time Paris was hit by a major flood was back in 1910 (see pics below), but if it occurred again – the chances are said to be 1/100 each year – then the IAU estimate the cost to the region could be €20 billion.

An interactive map has been created that allows you to see whether your home is in danger of being flooded.(CLICK ON IMAGE BELOW) This article was originally published in March 2016.