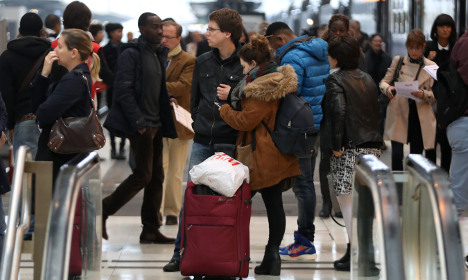 To foreign observers the recent plague of strikes has given the impression that France has ground to a halt and the long suffering public are all stuck at home with no fuel or trains.

Even though last week's fuel crisis has eased somewhat, Wednesday saw the start of a new wave of action, this time by rail staff, that saw around half of French train services cancelled.

Striking workers from SNCF had interrupted all train traffic at the Gare du Lyon on Thursday afternoon, with around 200 protesters on the scene, reported Le Parisien newspaper.

And the strikes look set to roll on.

While each union in each sector has their own grievances, the wave of industrial action is in protest against the government’s labour reforms, which they claim will lead to more inequality and will undermine job security.

How can the French public possibly cope with all these strikes? Surely they are ready to take to the streets in the millions to demand they are no longer held to ransom by trade unions?

Well not quite, most who The Local spoke to at Gare d L’Est on Wednesday offered a typical Gallic shrug and a message of support for those who are causing the travel misery.

A man named Kouamé Marus, who had been waiting an hour and a half for a train to Nantes said: “I fully support the legitimacy of the strikes. I am a worker myself. How else are we going to be able to reclaim the power if not by protesting in some way.” A woman who had waited two hours for a train said: “If we just let everything go, there will be no social equality.”

Many of those The Local spoke to pointed the finger of blame for the travel chaos squarely at the feet of the government rather than trade unions.

Passenger Nicole Nussbaum spoke of “political scandals” and “one rule for politicians and another rule for everyone else”.

She raised a common grievance pointing to how President François Hollande's Socialist government had pushed the labour reforms bill through parliament without the usual vote, because it knew it didn't have the support to get the green light.

“The majority of parliament are against the reforms and yet they're going ahead anyway. This isn't democracy. It's a violation of democracy,” Nussbaum said.

Some French rail passengers were looking at the positive side of having to cope with more strikes on the rail system.

Hannelore Grimé said: “It's not the end of the world, when there are strikes it is the only time that we talk to fellow passengers, we are united in our misery. You should always be optimistic.”

The refusal of many passengers hit by the rail strikes to blame the unions echoed the reaction of French motorists hit by last week’s fuel shortages.

Jean-Claude Delarue, the head of French rail users group SOS usagers told The Local that the situation for commuters in Paris was very difficult but nevertheless there was support for the cause. “The trains are packed every morning on a normal day so when half of services are cancelled it becomes unbearable for passengers,” he said.

“The labour reforms are very unpopular in our country and people are fed up with the growing inequalities in France,” said Delarue, who points out that the number of strikes on the French rail network has steadily reduced over the last 20 years.

“The reaction is not just because the French are pragmatic when it comes to strikes, it is also due to the fact that there is a lot of discontent about the situation in the country,” he said.

Opinion polls appear to back up what the passengers are saying with a surprising 46 percent of French people still supporting the unions' cause, an opinion poll in the Journal du Dimanche newspaper showed on Sunday. That's despite the industrial action having began back in March.

However clearly not all French people were supporting the strikers and one man, who saw his train cancelled, represented the frustration no doubt felt by many.

“Fuck SNCF, fuck CGT, go back to work and stop complaining about your privileges all the time,” said the disgruntled passenger named Fabien in Facebook rant.

“Thanks for ruining my weekend back in Brittany by cancelling my train, it's only fair that for someone that works 50+ hours a week without extra time off or paid extra hours, I fully don't deserve to see my family once in a while. Plenty of jobless people here who would kill to get your jobs.”

But one aspect of the strikes that most passengers agreed with was the fact they were bad for France’s image abroad.

“I am very worried about how these strikes will affect tourism. This doesn't give a very good image to tourists,” a female passenger told The Local.

“How will the Euro football go ahead? It's not possible.”

An opinion poll on Thursday revealed that 78 percent of French people feared that the Euro 2016 football tournament which starts on June 10th will be disrupted by the strikes.

There was some good news on Thursday however when French air traffic controllers called off their threat to strike between June 3rd and June 5th.

And in Paris the beginning of a rolling strike among transport workers left the city’s Metro system unaffected.