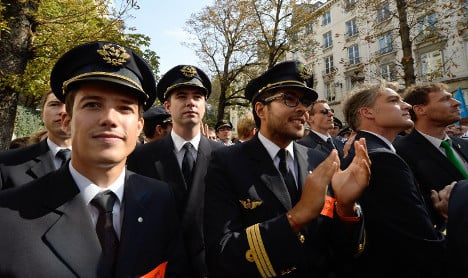 Air France pilots of the SNPL, Air France's main pilots union, demonstrating in 2014. Photo: AFP
The second biggest pilot union at Air France – the Spaf – had already filed an official strike notice on Wednesday for the period June 11th to June 14th.
That threat was backed on Thursday afternoon by two other unions, the SNPL – the biggest union among Air France pilots, and Alter.
The European Championships are set to begin on June 10th with an estimated 2.5 million visitors expected in France for the month long tournament. The strike notice warns of a “two to four day walk-out” and is motivated by pay and the pilots defending their jobs as competition increases from other Air France's budget subsidiaries like Hop! and Transavia.
It remains unclear exactly how passengers would be affected if the strike goes ahead as planned, but any major disruption to flights would presumably have a big impact on foreign fans trying to attend matches at Euro 2016.
In 2014 Air France pilots staged the company's longest ever strike that left thousands of flights grounded and cost the company hundreds of millions of euros.
The 14-day protest saw half of Air France's fleet grounded, and cost the airline between 15 million and 20 million euros a day. Thousands of passengers had travel plans disrupted.
READ ALSO: A complete guide to France's (many) upcoming strikes