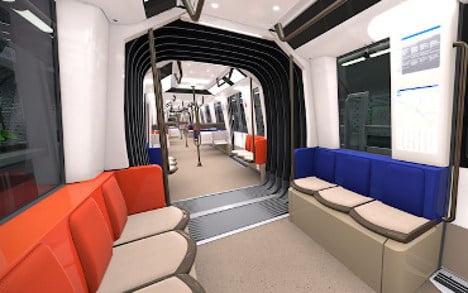 It will soon be time to say goodbye to the rusty, rickety Paris Metro trains.

Industrial giant Alstom has revealed the new design of the Paris Metro trains, which will be rolled out from 2019.

The new look will first be introduced on line 14 and will feature spacious orange, white, and blue interiors (see below).

The carriages will feature little “alcoves” (see below), as well as six seats and wheelchair space in each car.

The new trains will increase capacity on the line from 30,000 to 35,000 passengers an hour, and will facilitate the line's expansion north of the Saint Lazare business centre.

A fleet of 35 “MP14” trains will be added to line 14, followed by lines 4 and 11, all funded by the region's transport authority STIF.

The trains will be 20 percent more efficient than the current options, and will feature a 100 percent electric braking system in order to save and recover energy.

There will be LED lighting, along with a more efficient ventilation system, which adapts to weather conditions, producing both hot and cold air. All trains will be equipped with video surveillance.

CEO of Alstom Henri Poupart-Lafarge said the company was “proud to unveil the latest generation of metro, the benchmark in sustainable mobility” and that he hopes Parisians will appreciate “its comfort and reliability”.

Transport company Alstom secured the contract to deliver a maximum of 217 MP14 trains over fifteen years for a total amount of over €2 billion.