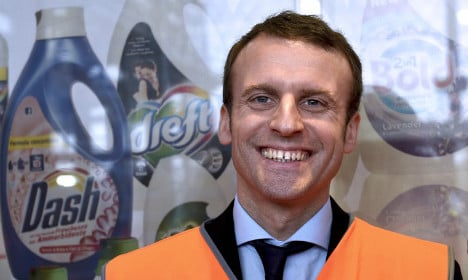 France's Economy Minister Emmanuel Macron will have to pay back-taxes after authorities found he had undervalued a family
property, two French media outlets have claimed.

The former Rothschild banker, who has sought to position himself as a possible candidate for next year's presidential election, denied being the target of any tax demand.

“I am up to date with the tax administration and the high authority on transparency in public life,” he said during a visit to a factory in northern France.

News site Mediapart and newspaper Canard Enchaine claim a tax audit has found that Macron is liable for a tax on the rich which affects anyone with property worth at least €1.3 million ($1.4 million).

The Canard Enchaine said discussions with the tax authority had lasted more than 18 months and hinged on the value of his wife's home in northern France.

The home was valued by the tax office at €1.4 million, rather than the €1.2 million stated by the minister.

The minister “has finally admitted that he should pay (the tax)” and resubmitted his tax declaration for 2013 and 2014, Mediapart said, adding that the increased bill and penalties would probably amount to less than €10,000.

Quizzed on Tuesday, Macron said he was in favour of transparency but also respected privacy over tax matters, “like all citizens”.

He claimed there had been a concerted campaign in recent weeks to dig up dirt “in order to destabilise me”.

The minister made waves last month by setting up his own political movement, “En Marche” (On the Move), seen as a possible first step towards a run at the presidency in place of the deeply unpopular Francois Hollande in 2017.

Cabinet colleagues have called for him to get into line.

Macron's office did not comment when contacted by AFP, but one close ally, Socialist MP Pascal Terrasse, said he was “the target of an attack because he is shaking things up”.

Macron earned nearly 2.4 million euros during his time at Rothschild between 2011 and 2012, according to the transparency body.

The deadline to file your French tax declaration for 2021 has now passed for everyone living in the country.

Depending on where you live and whether you send your tax return electronically or by post, the deadline was different.

Those filing electronically and living in départements 55 to 974/976 were given up until Wednesday, June 8th by 11:59pm – the most generous period of timeframe of any group in the country.

But what happens if you are late to file your return?

If you are late to file your return, you will generally be sent a letter known as a mise en demeure, which has to be signed for upon delivery. This letter will instruct you to submit your tax return as soon as possible and state the potential penalties incurred, should you fail to do so.

The amount varies according to how late you are.

If you were late to file your tax return but didn’t receive/sign for a mise en demeure, you will need to pay an extra 10 percent on top of your final tax bill.

If you file your tax return less than 30 days following the reception of a mise en demeure, you will need to pay an extra 20 percent on top of your final tax bill.

If you file your tax return more than 30 days following the reception of a mise en demeure, you will need to pay an extra 40 percent on top of your final tax bill.

The service-public website advises that a 0.2 percent monthly interest rate can be applied in the case of late payment.

There are also a range of penalties unrelated to late payment.

If French tax authorities discover that you have failed to declare a revenue stream, you could have to pay an extra 80 percent on top of your normal tax bill.

READ MORE What exactly do I need to tell the taxman about my assets outside France?

The maximum penalty for personal tax fraud in France is a €3m fine and seven years imprisonment.

France has dual taxation agreements with countries including the UK and USA, so if you have already paid tax on income in another country you won’t need to pay more tax in France – but you still need to declare it.

Another item that frequently catches out foreigners in France is overseas bank accounts.

If you have any non-French bank accounts, you need to list them on your tax declaration, even if they are dormant or only have a very small amount of money in them.

If you had an inkling that you may have to declare your earnings in France, then chances are you probably do.

You need to file a tax return if:

If one of these situations applies to you, but you have still not filed your return, it is best to reach out to the tax authorities before they reach out to you. You could plead that you forgot the deadline in “good faith” if you had a legitimate reason (serious illness, a death in the family etc.). If this is the first time that you have declared a late tax return, it is possible that the penalties won’t be enforced.

If you declare your taxes online, you can use the messaging space available via impots.gouv.fr.

Every town has a local tax office, where you can simply turn up without an appointment and ask for help.

What if I made a mistake on my declaration?

In 2018 France formally enshrined the ‘right to make mistakes’, in dealings with the authorities, giving people the right to go back and correct their declarations without attracting a penalty.

So if you realise you have missed something off or added the wrong information, you can either go back into your online declaration and correct it or, if you file on paper, visit your local tax office.

However the ‘right to make a mistake’ does not extend to late filing.