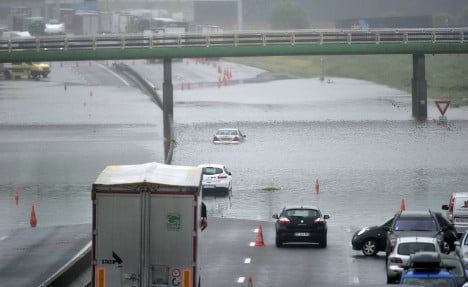 The A10 motorway is cut off by floods in France. Photo: AFP

Torrential rain in France has led to motorways being closed in France and prisons and schools had to be evacuated because of rising flood waters.

Parts of France remained submerged in flood waters on Wednesday as authorities raised the alert level to red for two badly affected areas.

The départements of Loiret and Seine-et-Marne to the south and east of the capital Paris were placed on red alert by weather service Météo France due to the dangers caused by flooding.

IN PICTURES: See more from the floods here Residents in the flooded Nemours, north of Paris. Photo: AFP

The service asked the public to avoid any kind of travel in the affected areas unless it was absolutely necessary.

The rising waters wreaked havoc on Tuesday as the A10 motorway, which links Paris and the south west, was flooded and has to be closed at St-Arnoult-en-Yvelines.

Around 650 vehicles were left blocked by the rising waters with around 200 motorists having to be transported in army trucks to the city of Orleans, which itself has been badly hit by flooding. One car that had tried to make it through was half-sunk in the water.

In the Loiret département the equivalent of 20 days rainfall fell in just 72 hours which led to a huge number of call outs to firefighters.

Several retirement homes had to be evacuated as almost two thirds of villages in the area were affected by flooding.

A prison in Saran, central France had to be evacuated, with some 400 detainees shifted to other facilities, according to prison authorities, while around 60 patients at a medical centre in Montargis had to be taken to a safe place.

SNCF said rail services between Orleans, Tours and Vierzon had managed to keep on track despite the numerous difficulties caused by the floods and heavy rain. Services between Paris and Orleans and Paris and Chartres were affected, however.

In Paris, the river Seine burst over walkways, prompting authorities to set up a crisis team. On Tuesday the height of the river reached 3.8 metres at Austerlitz and is expected to rise even further throughout Wednesday and Thursday.

Authorities however have played down fears the floods will be as bad as the flood of the century of 1910 (see below).

No dinner at these restaurants tonight #seine pic.twitter.com/T6lTyqKJCr

Yep. That's a bin that's meant to be beside (not inside) the river. #seine #paris pic.twitter.com/Mrpe8Dyqwr

Boats continued to navigate the river, but if the water level rises past 4.3 metres then river traffic will be halted.

In northern and central France, homes and cars were wrecked as flooding left several towns and villages under a metre or more of water. More than 80 roads across France had to be closed.

In the northern French city of Lens, firefighters were forced to patrol in dinghies and in the Yonne département of Burgundy scores of roads were flooded.

As well as the red alerts several départements in the north east of the country were also on orange alert due to the floods – Meuse, Meurthe-et-Moselle and Moselle.

Paris, meanwhile, should be well prepared for a flood. In March this year, authorities launched an unprecedented two-week exercise to simulate what would happen if the city was hit by catastrophic floods.

This week's flooding, incidentally, isn't a patch on the great floods of 1910. Click here to see more incredible pictures from yesteryear in Paris.