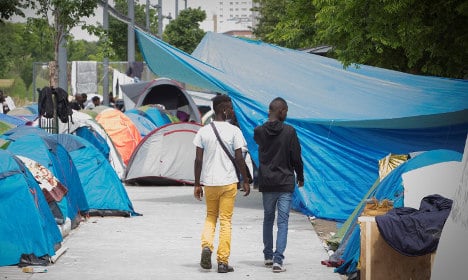 A new unofficial migrant camp in the north of Paris. Photo: AFP
Paris Mayor Anne Hidalgo said on Tuesday that the new camp would be built in the north of Paris, and that several potential locations had already been scouted.
“I hope that the centre will be a welcoming place to evaluation these people's situations, and also a site that allows the lodging of those in need,” she told reporters.
She added that officials were “going into overdrive” in an effort to get the site up and running “within four to six weeks”.
She promised more information in the coming days, including the name of the camp and its location.
Paris has struggled to cope with the numbers of refugees and migrants arriving in the city over the last year or two, with hundreds sleeping in makeshift camps that spring up before being closed by police.
Hidalgo said that kind of arrangement was no longer tenable. The mayor wanted a humanitarian camp built along the lines of the one at Grande-Synthe near Dunkirk, northern France (see photo). Two unofficial camps were set up in the capital last summer, which were aided by charities at the request of the City Hall.
The camps were near the Gare d’Austerlitz close to the river Seine and under the overground Metro in the 19th arrondissement. However they were eventually closed down.
While some of the occupants were taken into temporary housing, many simply ended up back on the streets in some of the numerous makeshift camps that have risen up without official permission.
Twice in March police were called in to clear migrants from a camp that had been set up under the overground rails at the Stalingrad Metro station.
The migrants, as usual, were boarded onto buses to take them to reception centres. (Photo: migrants sleeping rough at Stalingrad Metro station. Photo: AFP)
Many migrants sleep on the streets at or near the Gare du Nord train station, from where they try to take trains to the northern port of Calais in the hope of crossing the Channel to the UK. They were given a month to begin the process of seeking asylum.
Another planned shelter has proved contentious in Paris after it was announced that it would be built in the 16th arrondissement, one of the city's poshest neighbourhoods
The centre, planned to house 200 homeless people from this summer and onwards, sparked fears among locals that housing prices would tumble and potentially turn into something like The Jungle camp in Calais. Over 50,000 people have so far signed a petition to block the move.

The planned shelters for the 16th arrondissement. Photo: Moon Architecture

The migrants, as usual, were boarded onto buses to take them to reception centres.