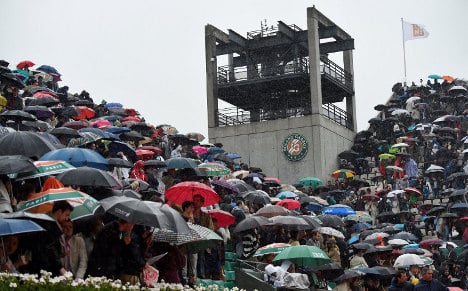 In case you hadn’t noticed, the month of May in France – well not everywhere in France – has been a very damp squib.

In fact in Paris it’s been the wettest month of May since way back in 1873.

The Paris area, the Loire Valley, and Picardy in northern France have been hardest hit by the untimely rainfall, as well as the Cévennes mountain range in south-central France.

And our readers are suffering.

Someone needs to accept the blame for this, so I suggest blaming the messenger. Why did The Local cause this?! https://t.co/E15bCATFxw

This is really, really bonkers weather. Umbrella useless. My only mission today is to buy a raincoat cc @bank_able. https://t.co/UTZfXZd5Ig

In fact on Twitter the hashtag #quandilpleut (when it rains) was trending top in Paris on Tuesday afternoon, a sign that the subject everyone was talking or at least typing about was the rain.

On Monday alone some 53mm of rain fell over the French capital, much to the dismay of tennis fans and players at Roland Garros, as the French Open suffered its first wash out in 16 years. In the whole month of May, Météo France, the country’s weather service, recorded 172mm of rainfall. Only July 2001 saw more rainfall in the capital since records began.

All that rain has meant a rise in the level of the River Seine, which has led to part of the Georges-Pompidou bank being closed to traffic (see below).

“In Paris, we’re pulverizing all the previous rainfall records for the month of May in recorded history, so since 1873,” weather expert Etienne Kapikian told l’Express newspaper.

Records have been broken not just in Paris but also in the Ile-de-France region in general, in Yvelines, Oise, Troyes, Blois, Amiens and Auxerre.

By Tuesday morning, some 45 days' worth of rain had fallen in just 24 hours along the French-Belgium border, according to Belgium's meteorological institute. “We've never seen anything like it,” said Cyril Boulleaux, mayor of the commune of Villeneuve-sur-Yonne in northern France.

“May is known for being pretty chaotic,” said Kapikian. “It’s the lottery from one year to the next… It’s not surprising, but at this point, this persistence of rain is remarkable.”

Ironically, Brittany in the west of France, the one part of the country known for its rainfall, has been fairly dry throughout May as have parts of the south west. Those living in these regions can count themselves lucky, like the reader who sent us this tweet of the skies over Brittany on Tuesday.

The département of Loiret, to the south of Paris, was placed on red alert – the highest level of warning – due to the dangers of flooding.

The rain has wreaked havoc and prompted warnings from the country’s weather service.

Météo France tells motorists not to risk trying to drive through flooded roads with even 30 cm of flood waters, which is enough to carry away a vehicle. Residents are also advised to avoid basements during periods of flooding.

At the weekend a three-year-old French girl drowned when she slipped and fell into a flooded basement.

“At the moment, waterways are saturated,” said Kapikian. “The smallest storm can cause floods. In France, many waterways are swollen. The Seine is rising, approaching the flood level of 2006.”