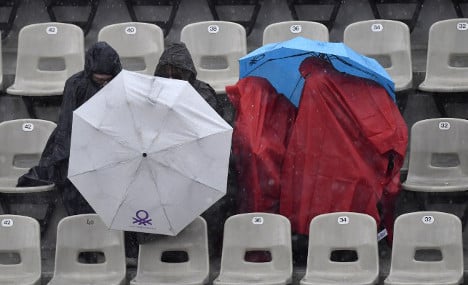 Orange alert weather warnings – the second highest alert level – had been in place for 23 départements in central and northern France on Tuesday morning with more heavy rain forecast.

By the afternoon those warnings were cancelled in most areas however the département of Loiret to the south of Paris was placed on red alert due to the risk of flooding.

The Seine-et-Marne and Loir-et-Cher remained on Orange alert.

By Tuesday, some 45 days' worth of rain had fallen in just 24 hours along the French-Belgium border, according to Belgium's meteorological institute.

“We've never seen anything like it,” said Cyril Boulleaux, mayor of the commune of Villeneuve-sur-Yonne in northern France.

In the northern French city of Lens, firefighters were forced to patrol in dinghies. While that's not quite the case in Paris just yet, the River Seine did burst in banks (see photo). As part of the warnings Météo France, the country's weather service, tells motorists not to risk trying to drive through flooded roads with even 30 cm of flood waters, which is enough to carry away a vehicle. Residents are also advised to avoid basements during periods of flooding.

At the weekend a three-year-old French girl drowned when she slipped and fell into a flooded basement.

The government said that on Monday firefighters were called out around 4,500 times across the country to deal with weather related incidents.

On Monday the weather led to stoppages on the Metro line in the city of Lille and disrupted train traffic in the north east of the country between Lorraine and Luxembourg.

Train services between the northern cities of Lille and Lens were also hit. Trains from Lille-Flandres station were delayed due to the weather, as the tweet below shows.

In the east of the country, in the département of Meurthe-et-Moselle, firefighters were called to evacuate several homes as flood waters rose.

Other départements hit by flooding were Loiret, Yvelines, Nord, Pas-de-Calais.

In northern Burgundy the heavy rain led to dozens of roads being blocked in the Yonne département, with firefighters struggling to deal with the amount of call outs.

Around 350 homes in the area were flooded.

With more rain forecast firefighters could yet have another tough day ahead.

In Paris the French Open tennis tournament at Roland Garros suffered its first wash out since 2000 as the rain meant no play was possible at all. And the situation is unlikely to improve on Tuesday with the rain still falling in Paris. Organizers will be under pressure to squeeze in all the delayed matches before the tournament is due to end on Sunday.