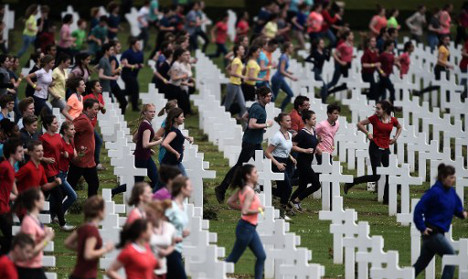 Sunday’s commemorations to mark the centenary of the Battle of Verdun have sparked anger among right and far right politicians in France as well as a fair amount of shock.

The weekend commemorations, which were attended by François Hollande and Angela Merkel, included a scene, that was unusual to say the least for a war anniversary ceremony, where proceedings are normally sombre and unextravagant.

Some 3,400 children from France and Germany ran among the graves of the fallen soldiers at Douamont to the backdrop of drumbeats, to represent the famous World War One battle.

The act was choreographed by German filmmaker Volker Schlöndorff and was designed to symbolise the chaos of the battle.

But some, notably the National Front’s Marine Le Pen, were not impressed.

The leader of the far-right party labelled it “indecent”.

“At Verdun, the “show” consisted of jogging among the tombs. Indecent, really indecent,” said Le Pen.

Her niece Marion Maréchal Le Pen, an MP for the National Front, waded in too. She said the “honor of our ancestors had been violated” and described her “immense contempt” for the event organisers.

Other politicians from the more centre-right Les Republicains party also spoke of the “indecency”, “bad taste” and “a lack of respect for the heros of Verdun”.

Even a BFM TV journalist said: “You just don't run around cemeteries”.

But was it really in bad taste?