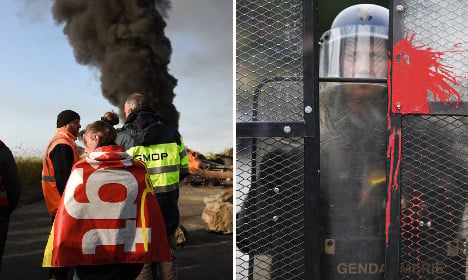 All photos: AFP
Brace yourselves.
Philippe Martinez, head of the powerful CGT union, said on Tuesday that this week would see “the strongest mobilisation in three months” of strikes.
The CGT and other trade unions haven't stopped calling for strikes all over France in protest of the labour reforms and other grievances around their working conditions and salaries.
And with the Euro 2016 football tournament to kick off in France in less than two weeks' time, things aren't looking promising.
Here's how you'll (probably) be affected.
Paris transport system – RATP
When: Indefinitely from Thursday, June 2nd
Where: Paris and its suburbs
Why: The CGT union says RATP workers are not happy with their pay or working conditions, and are also protesting new labour reforms.
How serious: The Metro, the RER A, and the buses will not be affected but the RER B, which serves the airports, will be.
Read more here
The SUD union called on RATP workers to join another indefinite strike from June 10th, the first day of the Euro2016 tournament, reported Le Figaro newspaper last week. Air traffic controllers
UPDATED:
When: June 3rd to June 5th
Where: Nationwide
Why: Unions representing air traffic controllers and other civil aviation workers say: “The drop in staff numbers, which has been going on for almost ten years, has become intolerable”.
How serious: On Wednesday two of the big unions SYNCTA and UNSA called off the threatened strike after negotiations and on Thursday two other unions the CFDT and Force Ouvriere also dropped the planned action.
The CGT -USAC has vowed to continue the strike action.
But even before the two other unions cancelled strike action on Thursday, transport minister Alain Vidalies said air traffic should be “almost normal” during the strike period. Breathe a sigh of relief.
Read more here National rail services – SNCF
When: Ongoing since Tuesday May 31st, the strike has seen trains cancelled across the country, although participation in the strike is expected to wane with time. Nationwide action June 14th will also likely see disruption.
Where: Nationwide
Why: Workers want improved pay and better working conditions from SNCF, and they're also protesting the proposed labour reforms.
How serious: Fairly. Around a half of the services weren't running on Wednesday, with 17 percent of workers on strike.
Read more here Nationwide strikes
Potentially the worst day for strikes will be Tuesday June 14th when unions opposed to the labour reforms have called for nationwide walk-outs and street protests.
Up until now, such days of action have resulted in transport problems around the country on train services and at airports. See below for more specific information. Orly Airport
When: Tuesday June 14th
Where: Orly Airport in Paris
Why: The CGT union is protesting the labour laws.
How serious: Last week, when the airport was also on strike, the DGAC, France's Civil Aviation Authority, asked airlines to reduce their flight programmes by 15 percent in order to cope with the strike. It remains unknown at this point if it will be as bad or worse in two weeks. Fuel depots and refineries
When: Ongoing
Where: All over France
Why: CGT, Force Ouvriere, and Sud unions protesting the labour reforms.
How serious: At its worst, these strikes have been very serious for the public. They've caused meant long delays, and saw panicked motorists stocking up in fear of a worse shortage. Conditions are greatly improving, however.
Most depots had been cleared by Wednesday, although workers at an oil terminal in the northern port of Le Havre — which supplies kerosene to Paris's two main airports — extended their blockade into Wednesday.
Read more here Electricity supplies
When: CGT called for a strike to kick off (again) on Wednesday
Where: At French nuclear, hydro, fuel and coal-fired plants.
Why: Labour reform protests, as usual.
How serious: Remains unknown, but France saw workers at 16 of 19 nuclear power plants on strike last week.
Read more here Ports
When: Thursday, June 2nd, for 24 hours
Where: Nationwide at the ports
How serious: Remains unknown, it was only called for by the CGT recently, and once again over the labour laws. But, it is scheduled to last all day so it's worth checking in with any boat trips you might have to do beforehand.