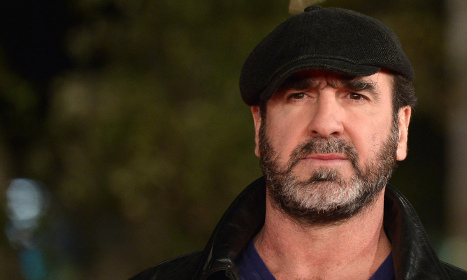 Cantona stirred up a hornet's nest last week when he claimed that France coach Didier Deschamps was guilty of racial discrimination in his selection, comments that French football chief Noel Le Graet on Saturday dubbed as “stupid” and “pathetic”.

“In this time of trouble and division, I would have liked all of the France that I love and dream of be represented in this France team. Football for me is a fantastic way of integration and should serve to unify and unite,” Cantona said in a column published in Le Journal du Dimanche.

“We missed this chance by not selecting Benzema and Ben Arfa, two of the best French players.

“Firstly I think that from a sporting point of view it's a mistake and then, this European Championships, which moreover is in France, is an extraordinary opportunity to send a clear message to the extremists, whoever they might be.

“I'm neither linked to any party nor the puppet of any ideology,” he added. “I'm atheist. I am and always will be a free man.

“For those who'd like to make believe that I'm spouting anti-white racism, my response is one of contempt.”

Cantina, 50, told British daily The Guardian on Thursday that Deschamps had snubbed Benzema and Ben Arfa because of their “north African origins”.

Deschamps' lawyer said Friday that the France coach would be suing Cantona for slander over his comments.

Cantona, who won 45 caps for France between 1987 and 1995, has in the past been very critical of his former teammate Deschamps, who in 1996 he branded a “vulgar water carrier”.

The former Marseille and Manchester United striker retired in 1997 before taking up a career in cinema. In 2007 he married Franco-Algerian actress Rachida Brakni.

Deschamps, 47, went on to captain France to the 1998 World Cup title and 2000 European Championship crown.

The exclusion of Benzema, of Algerian descent, follows his implication in an alleged attempt by one of his friends to blackmail international teammate Mathieu Valbuena over a sex tape.

Ben Arfa, of Tunisian origins, had been hopeful of making the squad after relaunching his career at Nice but instead had to settle for a place on Deschamps's standby list of eight players.