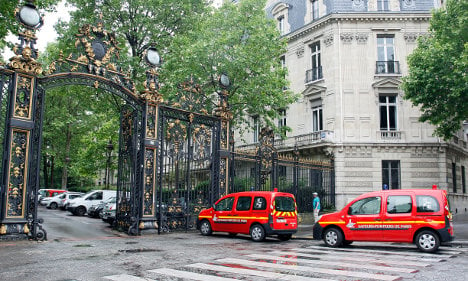 The bolt hit the Parc Monceau in the north west of Paris on Saturday afternoon.

“There are currently 11 injured unfortunately, 10 children and an adult who was accompanying them,' Vincent Baladi of the local authority told iTELE television.

“We have six (children) who urgently need medical treatment but we hope they will all pull through,” said Baladi, who handles security matters in
Paris' eighth arrondissement where the park is located.
“They have burns,” he said, adding that paramedics and firefighters were at the scene. “The lightning struck suddenly.”Police say a medical unit is being set up on site to treat the victims with “absolutely urgency”.

Local media reports suggest the children were at a birthday party when the thunderstorm struck.

Fire officers were unable to provide any more immediate details of the accident, which happened at the Parc Monceau in north-west Paris in the afternoon. Despite warm and sunny weather in the morning, Paris was hit by thunderstorms for much of the afternoon on Saturday.

Much of the rest of France has also seen storms on Saturday.

Météo France, the country's meteorological service, issued orange alert warnings for 19 départements of France on Saturday. Orange is the second highest warning level on the service's system, and asks the public to be “very vigilant”.