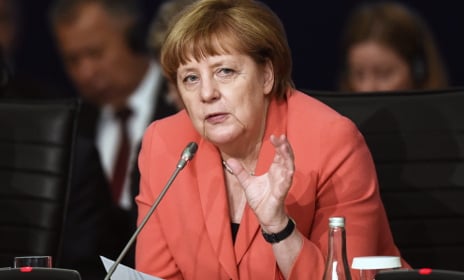 “Europe has problems, but Europe has also done and achieved many things,” Merkel said. Photo: DPA

“To be invited to these commemorations shows the extent to which relations between France and Germany are good today,” said Merkel, ahead of Sunday’s centenary marking one of World War I’s bloodiest battles which cost more than 700,000 lives.

“This battle was one of the most devastating and brutal ever,” she said in her weekly video podcast.

“What is shocking is that, 25 years later, no lessons were learnt and World War II followed the first,” once again pitting the neighbours against each other.

Hollande and Merkel will oversee an act of remembrance at Verdun in northeastern France Sunday as Paris and Berlin seek to promote closer union in Europe despite lingering economic woes and the possibility that Britain will leave the EU after next month’s referendum.

“Europe faces difficult tasks, there is no doubt about that,” said Merkel, stressing that she hoped Britain would vote to remain.

“Europe has problems, but Europe has also done and achieved many things,” the German leader added.

Despite occasional friction between the two countries, Merkel praised the Franco-German axis at the heart of the bloc for being able to “reach compromises — we did that very well during the euro (debt) crisis,” she said.