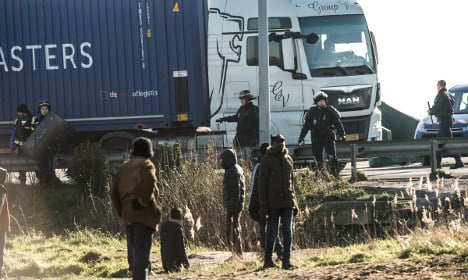 French riot police guard a truck after migrants tried to mount several trucks near the Eurotunnel, near Calais earlier this year. Photo: AFP

The man, who lived in the city's ramshackle “Jungle” camp used by migrants, is one of at least 26 people killed attempting to reach Britain since June 2015.

Between 4,000 and 5,000 migrants are living in the Jungle in the hope of smuggling themselves to the UK aboard lorries crossing the Channel.

“The victim was part of a group of about 50 people who placed tree branches on the A16 (motorway)” hoping to slow passing trucks allowing them to stowaway with the goal of reaching England, a statement from the local prefecture said.

The incident came two days after a mass brawl at the camp between some 200 Afghans and Sudanese which left 40 people injured.

A total of 260 police officers were sent to the camp along with 70 firefighters and 11 ambulances. An investigation is now under way.

Fights have previously broken out in the tense and desperate atmosphere of the camp, which is roughly divided between different nationalities from the Middle East and Africa.