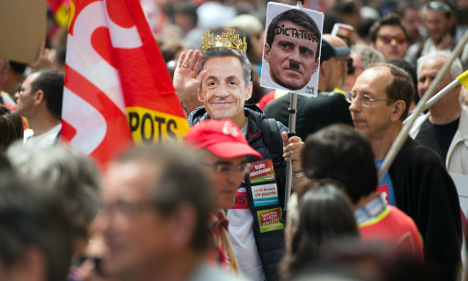 Photos: AFP
The month-long tournament, which is being hosted by France and kicks off on June 10th, is expected to bring approximately 2.5 million visitors to France.
This includes 500,000 British football fans, who will arrive by plane, train and car.
However, life won't be easy for them. The CGT and other trade unions called for strikes all over France in the coming days and weeks in continued protests of the labour reforms and other grievances around working conditions and salaries.
The impact of the strikes is still unknown until we can gauge how many workers will following the unions' call to arms.
Here’s how you could be affected if you are planning on coming to France for Euro 2016:
Nationwide strikes
When: After striking on Thursday May 26th, unions opposed to the labour reforms have called again for nationwide walkouts and street protests on June 14th, four days after the opening game of Euro 2016.
How serious: As of late, these days of action have resulted in transport problems on train services and in airports across France.
Matches affected: This could be a particular problem for those attending games on 14th June, when the group stage will be in full swing. Austria will be playing Hungary in Bordeaux and Portugal will be playing Iceland in St-Etienne. It could also affect those trying to arrive for future matches or trying to return home after the opening few days. National rail services – SNCF
When: Last Tuesday the CGT announced that they will ask members to strike daily from June 1st. Until now CGT have been striking every Wednesday and Thursday. SUD have also threatened to call members to strike from now until 11th July. On top of this, UNSA and CFDT are calling rolling strikes from May 31st at 8.00PM.
The nationwide action on June 14th will also affect the trains (see above).
Where: Nationwide
Why: Workers want improved pay and better working conditions from SNCF, and they're also protesting the proposed labour reforms.
How serious: It is all fairly complicated, as there are a number of different unions involved, threatening potential strikes at different times. Around a quarter of the train services will not be running nationwide if strikes go ahead. Nonetheless, last Wednesday only ten percent reportedly participated in the CGT initiated strike, marking a 15 percent drop from the previous week and perhaps that mobilisation is fizzling out.
Matched affected: As it affects the national rail services, this could affect any fans travelling between cities in order to get to a game over the four-week period of the tournament. There is no indication yet as to how long these strikes could go on or how many workers will strike.
Fuel depots and refineries
When: Ongoing.
Where: All over France
Why: CGT, Force Ouvriere, and Sud unions are protesting the labour reforms. At least six out of the eight refineries in France have either stopped operating or have reduced output due to strikes and blockades.
How serious: Fairly. Although the head of France’s petroleum industry said that the country was still a long way from a nationwide shortage, some 80 percent of petrol stations are still running low or on empty. The smartphone app Essence, which has been publishing a real time map of the shortages across the country claims around 5,300 out of the country’s 12,000 petrol stations are either empty or running low. Nonetheless, it looks like the crisis could be easing this weekend.
These strikes could also affect maritime transport, particularly in Marseille, where ports are connected to the oil refineries that have been targeted by strikers.
Matched affected: If strikes continue, it could prove difficult for fans planning to drive to France or between venues when attending matches, especially towards the start of the tournament.
Paris transport system – RATP
When: CGT Union have warned of indefinite strikes from Thursday, June 2nd, whilst SUD Union have called on RATP workers to join another indefinite strike from June 10th, the first day of the tournament.
Where: Paris and its suburbs
Why: The CGT union says RATP workers are not happy with their pay or working conditions, and are also protesting new labour reforms.
How serious: Remains unknown, but Metro, bus and RER rail services would be affected – and the RATP carries 3 billion passengers a year. If both CGT and SUD Union members strike at the same time, which is looks like they could, this would also increase the impact of the industrial action.
Matches Affected: This could affect those games being played in Paris over the course of Euro2016, including the opening game between France and Romania at the Stade de France. Orly Airport
When: June 14th
Where: Orly Airport in Paris
Why: The CGT union is protesting the labour laws.
How serious: This comes as part of Nation-wide strikes and after a strike on Thursday May 26th, during which the DGAC, France's Civil Aviation Authority asked airlines to reduce their flight programmes by 15 percent in order to cope with the strike. The impact on June 14th could be similar.
Matched affected: There are no matches being played in Paris on this day, however it could affect those planning to fly into France for future matches, including the Romania Switzerland game in Paris on Wednesday 15th or the England Wales game on Thursday June 16th.