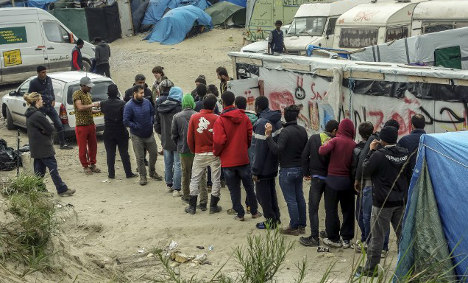 Some 20 people living in the “Jungle” refugee camp in the northern French port of Calais were injured in a brawl between around 200 Afghans and Sudanese on Thursday, local officials said.

Some reports said the number of injured was as high as 40 and that 13 had to be hospitalized. On Friday prosecutors opened up an official investigation into the violence.

Police said one person had been shot,but this was later denied by local officials, who did confirm that several people received knife and baton injuries.

“Around 20 migrants, three volunteers and a police officer were injured in a brawl between Afghans and Sudanese. The reason for the fight has not yet been determined,” the regional authority said in a statement.

The fight broke out as food was being distributed at the Jules-Ferry aid centre, the authority said.

An AFP reporter at the scene said several makeshift shelters were been burned down and that 15 fire trucks had been called to the site.

Around 20 police cars also arrived to break up the fight, and tear gas was deployed, the AFP reporter added.

The situation had calmed down by early evening.

Fights have previously broken out in the tense and desperate atmosphere of the camp, which is roughly divided between the main communities — primarily Afghans, Sudanese, Kurdish and Syrian.

A fight between Afghans and Sudanese in March left 19 people injured.

Although the government says the number is vastly inflated, French and British charities say nearly 5,000 people remain in the Jungle despite efforts to clear the camp and demolish shelters earlier this year.

Thousands of migrants and refugees have camped out there, hoping to smuggle themselves aboard lorries that are crossing the Channel to Britain.