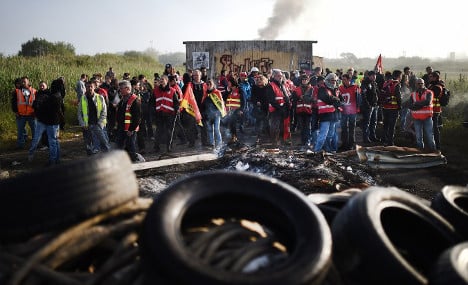 This was meant to be France’s summer. A time to remind the world of just what a brilliant place it is to hold big events. With bids announced for Expo 2024 and the Olympics, a successful UEFA 2016 football championships was going to be a show case for everything great about French administration and organization.

A successful tournament, the world’s eyes on full stadiums and millions of happy supporters, this was to be the backdrop to a return to better times. As TGVs whisked supporters the length and breadth of the land, we were to enjoy just how right a bit of central planning can be, and reflect that maybe us Anglo-Saxons are the ones who have it all wrong.

But with the tournament just two weeks away, France is grabbing headlines for a different reason, as a series of protests against necessary labour law reforms have suddenly escalated into something much bigger.

One of France’s biggest trade unions, the CGT, has taken to the metaphorical barricades, and seems to be determined to bring the government to its knees. In the space of a few days, strikes have reached power stations, oil refineries and the railways, with the masterplan to insure that paralysis strikes France just as all the world is looking. Recent statements from their firebrand leader Philippe Martinez,  suggest that the CGT plans on a fight to the finish. Similarly bellicose language from French Prime Minister Manuel Valls would suggest that things are going to get worse before they get better.  It looks increasingly likely that UEFA 2016 will grab the headlines for the wrong reasons, but this need not be a bad thing if this conflict leads to a positive outcome for France.

I’m just about old enough to remember the UK’s winter of discontent in 1978, where an unpopular government was taken on by a series of unions determined to exploit the situation to their advantage. One after another the unions gained generous concessions as power cuts bit hard and rubbish piled up in the streets, but they also lost the battle for public opinion.

The General Election in 1979 brought Margaret Thatcher to power with a mandate to end trade union hegemony once and for all.  The 1978 “Winter of Discontent” is still mentioned today as a low point in the UK’s economic history, and yet it led to the most dramatic change to the economic fabric of the UK since the Industrial Revolution. Get ready then for a troubled June as battle lines are drawn – trains won’t run, we might have some power cuts and the queues at filling stations will go on.  The government won’t back down unless accompanied by Prime Minister Valls’  resignation and media outlets all over the world will delight in France’s misery. The chaos will dissipate by early July in time for the strikers to take their holidays, and the government will limp along until next May’s Presidential election.

That election, with the memory of France’s Summer of Discontent still fresh, might well give a brave politician a real mandate for change. With any luck a tiny minority of workers enjoying working conditions the majority could only dream of, will never again be allowed to hold a country to ransom.

All those images of stranded football fans and France dominating the news cycle for the wrong reasons will not have been in vain. So bring on this French Summer of Discontent, and may history remember it as the moment when things really did begin to change for the better.

THe original version of this article appeared on the website of the Franco British Chamber of Commerce. To view CLICK HERE.

Martin Dixon is a Director of the FBCCI writing in a personal capacity, and his views are his own and do not reflect those of the FBCCI nor of any organization with whom he is attached professionally or personally.  You can join the debate here on the FBCCI Linkedin Group.